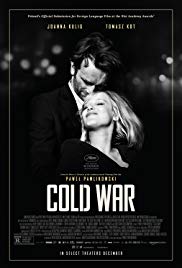 Greetings again from the darkness. Who doesn’t enjoy a good love story? The wonderfully talented filmmaker Pawel Pawlikowski proves to us the massive difference between a story of ‘good love’ and a ‘good story’ of love. With two lead characters based (somewhat) on his own parents (and named after them), we witness how two people can be simultaneously meant for each other AND not meant to be together. It’s the story of a man and woman forever connected, yet painfully mismatched.

Director Pawlikowski’s extraordinary last film, IDA (2013) won the Oscar for Best Foreign Language film, and this time he starts us off with a curious montage of Polish folk musicians (including bagpipes and violins) performing their songs … each in stark and static close-ups. This strange opening only makes sense to us much later, as we realize what a key element music plays in the numerous shifts in tone – the chapters – of the story.

Former lovers Wiktor (Polish star Tomasz Kot) and Irena (Agata Kulesza, IDA) are co-directors of a Polish song and dance performance team, and as they are conducting auditions, Wiktor is immediately drawn to Zula (Joanna Kulig), one who has a pure singing voice but a questionable past to go with no previous dancing experience. Irena recognizes lust when she sees it, but Wiktor stands firm that he perceives Zula’s stage presence as something special. The film covers the period of 1949 through 1964, and in that time we watch as Wiktor and Irena are both proven right. Mr. Kot and especially Ms. Kulig deliver extraordinary performances … truly captivating.

Director Pawlikowski offers up a love story unlike anything we’ve ever seen on the big screen. Wiktor and Zula experience the most tumultuous and romantic ride through Poland (the company first performs in Warsaw), East Berlin, Paris, Yugoslavia, back to Paris, and back to Poland. There were likely some other stops along the way, but those are the ones I made note of. Sometimes they are together, other times they are separated. It’s 1952 East Berlin where they formulate a plan to defect … only Zula is a no show, and they don’t meet up again for a couple of years. In one Paris rendezvous a few years later, Zula explains to Wiktor that she married another man “for us”. Somehow this makes sense.

It’s best to know no other specifics of this relationship. Star-crossed lovers is not a phrase used much these days, and perhaps even that description falls short. What causes someone to sell their soul for another – or sacrifice so much? How can so much pain and humiliation be accompanied by so much longing and yearning? What’s fascinating is that the film’s music styles shift in tone right along with their relationship. Sometimes the music is political (with a Stalin poster) – as that is the wall between them, and then later Zula is dancing totally free to “Rock Around the Clock”.

There are no wasted words here. The black and white images of cinematographer Lukasz Zal complements each segment with the appropriate softness or harshness depending on the characters’ emotions of the moment. Certainly at the heart of this story is the role of memories … how snapshots in time can impact our feelings, at times causing us to be oblivious to rational thought. As viewers, we experience a constant feeling of impending doom – even during the good times for Wiktor and Zula. The unusual editing style of extended cuts to black signal shifts in time … the blackness held for an extra beat or two, allowing us to brace for the next chapter. Polish jazz pianist Marcin Masecki scored the film – a crucial element not just because our two main characters are musicians, but because the music guides us through the lives we see. The film recalls the crown jewel of mismatched lovers in CASABLANCA as two lovers apparently meant to be together, but real life circumstances prove too much. Yet another excellent film from Pawel Pawlikowski.

This entry was posted on Wednesday, January 2nd, 2019 at 8:26 pm and is filed under Drama, World Cinema/Foreign. You can follow any responses to this entry through the RSS 2.0 feed. You can leave a response, or trackback from your own site.