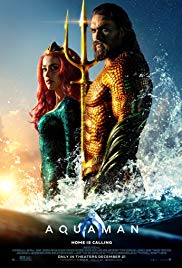 Greetings again from the darkness. Were the TV series “Entourage” still on the air, they would now need a new recurring punchline. The AQUAMAN movie is real! At the helm, we are surprised to find the master of horror, James Wan, in the director’s seat. Mr. Wan is known for such genre flicks as SAW, INSIDIOUS, and THE CONJURING, and his talent for visuals transfers well to the comic book style. In fact, with a run time of almost 2 ½ hours, the visual effects are both exhilarating and exhausting.

Sure, we’ve seen short bursts of Jason Momoa as Aquaman in a couple of previous DC movies, but this time he owns the pool. Momoa plays Arthur Curry as a hunky beer-chugging rock and roll party dude who just happens to talk to fish and breathe underwater.  Since it’s the first Aquaman movie, writers David Leslie Johnson-McGoldrick (ORPHAN) and Will Beall (GANGSTER SQUAD) provide us the backstory.

On the coast of Maine in 1985, a lighthouse attendant named Tom Curry (played by Temuera Morrison) discovers Princess Atlanna (Nicole Kidman) washed ashore. What follows is a whirlwind romance, the birth of their son Arthur, Nicole snacking on a goldfish, as well as her first kick-ass action fight scene. To protect her son, she agrees to head back to Atlantis where she faces the consequences of birthing a half-breed with a landlubber.

When we first see a grown Arthur – with a classic hair flip – he is thwarting the hijacking of a Russian submarine by Black Manta (Yahya Abdul-Mateen II) and his father (Michael Beach, IF BEALE STREET COULD TALK). Manta is one of the two main villains – the other being Orm (Patrick Wilson), Arthur’s war-mongering, power-thirsty half-brother. Sharing a common enemy, Orm enlists Manta and provides a highly-advanced weapon that, for some unfathomable reason, Manta begins (via montage) to ‘Iron-Man’ it to another level – one much less stable. It’s Orm who gets much more screen time as he plots a massive attack on surface dwellers (humans) who have been destroying the sea for years. You didn’t think Hollywood would miss a chance to tell us how despicable we are, did you?

The basic story is that Orm must defeat Aquaman to claim the throne and become Master of the Sea. Of course, Arthur is reluctant to get involved and only does so at the urging of his old mentor Vulko (Willem Dafoe) and Mera (Amber Heard), both of whom wish to avoid a war with humans. The first battle of the would-be kings takes place in The Ring of Fire, a royal battleground missing only the accompaniment of Johnny Cash. The duel ends prematurely, so that an epic battle can later serve as the film’s epic climax.

Although director Wan may throw a bit too much ‘plot’ and action at the proverbial wall, it is interesting to note the history/mythology associated with Atlantis, the ruling class, and the missing trident. The legends are fascinating and the journey takes us to all ends (and depths) of the globe … from the deepest seas to the middle of the Sahara Desert (itself once a sea) to the incredible core of the Earth. We see the ancient ruins, as well as the high-tech futurama Atlantis … and it’s all stunning to watch.

Don’t tell Marvel, but the film is somewhat a blend of BLACK PANTHER and THOR, and Momoa is every bit the Aquaman that Chris Hemsworth is Thor (quite a compliment). Yes, we find out that Atlantis, like our dry land world, is burdened with politics and power-hungry types, but the underwater world and the visual effects keep us mesmerized. We see terrific dragon-like sea horses, a drumming octopus, and a Kraken-like creature supposedly voiced by Julie Andrews (fact or fiction?). There is an early sequence that takes swimming with dolphins to a level you didn’t experience on your vacation, and the lighting effects at times recall TRON and can be a bit disorienting.

This is probably the largest scale DC movie to date, and director Wan chooses to make a splash with every element – character, mythology, setting, and effects. We also get appearances from Dolph Lundgren as King Nereus and Randall Park as a TV talking head/oceanographer making the case that Atlantis is real and a threat. We even get Roy Orbison singing “She’s a Mystery to Me”, and the IMAX aspect ratio makes the first ever over-the-top underwater spectacle. And what a spectacle it is.

This entry was posted on Thursday, December 13th, 2018 at 9:52 pm and is filed under Action, Fantasy, Sci-Fi. You can follow any responses to this entry through the RSS 2.0 feed. You can leave a response, or trackback from your own site.