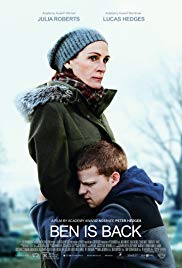 Greetings again from the darkness. So many families have been thrown into turmoil due to a loved one’s drug addiction. Count writer/director Peter Hedges among those, so know this is more than just another film for him … it’s personal. Mr. Hedges previous work includes the underrated PIECES OF APRIL (2003) and DAN IN REAL LIFE (2007), as well as an Oscar nomination for his ABOUT A BOY (2002) screenplay. This time out, he cast his own son Lucas in the titular role of Ben. It was a wise choice.

When your son is checked into drug rehab, and you pull up to your house on Christmas Eve and see him pacing in the front yard, should your first reaction be total joy or immense trepidation? Are you thrilled to see him or worried for your other 3 kids – each who is in the car with you? Such is the moment for Holly Burns (played by Julia Roberts). With excitement from her two youngest, and pleas of “no” from her teenage daughter Ivy (Kathryn Newton), Holly bolts from the car and embraces Ben (Lucas Hedges), her eldest and most self-destructive child.

What follows is the ultimate example of inner-conflict for both mother and son. Holly is simultaneously happy to see her son and apprehensive for his well-being and that of her family. Ben is putting up an “all is well” front, while carrying the guilt of lying through his teeth. This initial sequence is by far the most powerful segment of the movie, and adding punch to these scenes are Ms. Newton and Courtney B Vance as Holly’s husband and Ben’s stepfather. Lucas Hedges and Kathryn Newton are immensely talented and two of the fastest rising young stars. He was nominated for an Oscar for his performance in MANCHESTER BY THE SEA, and she is recognizable from her work on “Big Little Lies”.

After such a strong beginning, the story falters quickly as it spreads outside of the family home. At the local shopping mall, mother Holly spews vicious venom at the doctor who first prescribed the pain killer for Ben’s sports injury. She blames the now dementia-riddled doctor for ruining her son’s life – it’s an all too obvious and overblown moment of a parent needing to place the blame elsewhere. Soon after, we truly fly off the rails as mother and son treat us to a tour of the cities drug-related highlights. When the family dog goes missing, most people post on Facebook for help. Not this family. They hop into the car and revisit all the drug havens and dealers from Ben’s past. Of course, we do get the obligatory drug recovery meeting where Ben’s soliloquy praises his mother (she’s in attendance) and shows remorse for his many sins.

Every parent will understand the desperate feeling of mother Holly here or father David (Steve Carell) in BEAUTIFUL BOY, a similar-themed movie released earlier this year. We are also familiar with the deceptive and often dangerous actions of addicts, even those who were raised in our home. So while we are flexible in our judgement of Holly, Ms. Roberts’ performance is just too showy and over-the-top here, though she’ll likely be lauded for a dramatic role with only minimal dependence on her usual acting quirks. The first third of the movie is outstanding, however the rest comes across as an attempt to create intense drama when there’s already plenty.

This entry was posted on Thursday, December 6th, 2018 at 10:46 pm and is filed under Drama. You can follow any responses to this entry through the RSS 2.0 feed. You can leave a response, or trackback from your own site.