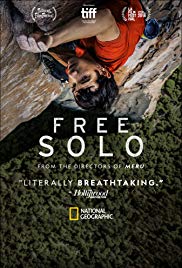 Greetings again from the darkness. Free Solo rock climbing is defined as climbing without use of ropes or safety gear and without a partner. The death rate is off the charts, and it’s difficult to avoid the word ‘crazy’ when describing the act. This film follows renowned free soloist Alex Honnold and his pursuit of Yosemite’s 3000 foot El Capitan wall … one of the most awe-inspiring natural rock formations in the world.

You might assume Alex is one of the “dude” spouting, gnarly-haired, free-spirited types we’ve come to associate with extreme sports, and if so, you’ll be surprised to discover a relatively quiet, kind of geeky, socially awkward thirty-something with a charming smile and reserved personality that leans towards analytical. His success has brought him enough money and recognition that he started a non-profit foundation that brings technology and facilities to impoverished areas around the globe. Alex is an unusual guy who lives in a van and eats meals right from the pan.

Despite the relatively straight-forward goal of accomplishing one of the greatest feats in rock climbing history, there is actually a lot going on in the film. We get familiar with Alex by learning some about his childhood, hearing directly from his mother, listening to his exchanges with climbing legend Tommy Caldwell (himself the subject of the upcoming documentary THE DAWN WALL), and witnessing his first real relationship with Sanni McCandless, whom he met when she attended one of his book signings. There is also a segment on Alex’s MRI where the doctor explains his amygdala requires extraordinary simulation to register on the graph. In other words, his fear factor is mostly non-existent.

The most fascinating segments include his preparations for the climb, and the conflicts about whether he wants the cameras present. Alex and the filmmakers (Jimmy Chin and Elizabeth Chai Vasarhelyi) are equally concerned about whether cameras will distract – will they cause him to make a move he might not otherwise make? The slightest error could lead to instant death, as we learn that dozens of other known climbers have perished in the last few years.

Alex’s preparations are methodical and detailed. Every nuance of El Capitan’s Free Rider path is etched in his mind and his notebook. He is armed only with a bag of rosin, tight-fitting shoes, freakish finger strength, and an other-worldly sense of balance. And of course, his laser-focused mission of perfection … anything less leads to tragedy.

National Geographic is distributing the film, and even those with a certain fear of heights or nausea should be fine watching. The camera crew, who themselves find it difficult to watch Alex in action, captures some amazing shots – whether by wrestling with a camera as they dangle from climbing rope, or perched on the ground with a powerful telescopic lense. Nature is stunning and Alex’s presence brings tension and awe. His existential accomplishments and goals are not for publicity or glory, but simply because that’s how he’s made. The film succeeds in making this point, although we can’t help but utter “crazy” at least a couple times during his momentous climb.

This entry was posted on Tuesday, December 4th, 2018 at 6:50 pm and is filed under Documentary. You can follow any responses to this entry through the RSS 2.0 feed. You can leave a response, or trackback from your own site.