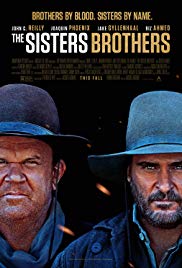 Greetings again from the darkness. It was a good news – bad news kind of day for westerns. First, it’s announced that Mel Gibson will direct a remake of Sam Peckinpah’s 1969 classic THE WILD BUNCH. Talk about an undesired and unnecessary project! Fortunately, the movie gods understood this gut-punch and as a peace offering, delivered this near-masterpiece that doesn’t so much re-invent the Western, but rather provides a tonal and stylistic twist to the genre.

This is the first English language project from writer/director Jacques Audiard, who has previously delivered such powerful and well-crafted films as A PROPHET (2009), RUST AND BONE (2012), and DHEEPAN (2015). Based on the Patrick DeWitt novel, with a screenplay from Mr. Audiard and his frequent collaborator Thomas Bidegain, this latest is a very unusual film that teeters on satire at times, but is simply too bleak to be a comedy – although it’s too darn funny to be an outright drama.

A terrific opening sequence in 1851 Oregon features a nighttime shootout that sets the stage both visually and tonally for what we will experience for the next couple of hours. It’s beautifully shot and there is some misdirection on what exactly the Sisters brothers are made of. John C. Reilly is absolutely wonderful as Eli Sisters, the soulful forward-thinking one who also has a dash of goofiness to him. His younger brother Charlie Sisters, played by Joaquin Phoenix, is the slightly unhinged one who frequently follows in his hated father’s footsteps by drinking heavily. Charlie is alternatingly quietly menacing and drunkenly menacing. The two brothers are hired assassins, and while Eli dreams of a peaceful retirement, Charlie can’t imagine not doing what they do.

The brothers have been contracted by ‘The Commodore’, a rarely seen power broker played in brief glimpses by the great Rutger Hauer. They are to meet up with advance scout John Morris (played by Jake Gyllenhaal with a quasi-British accent) and kill Hermann Kermit Warm (Riz Ahmed), who has supposedly stolen from The Commodore. Of course, there is more to the story. Warm has actually developed a chemical compound that allows for the easy gathering of gold from waterways – remember this is the height of the Gold Rush.

This is kind of a road trip film … only it’s on a horse trail from Oregon to San Francisco, and it’s kind of a buddy film … only it’s two brothers. Along the way, bonds are forged and broken, and paths are crossed with a kind-hearted saloon gal (Allison Tolman), a greedy town lord (trans actor Rebecca Root), and the brothers’ mother played by the always interesting Carol Kane. There is also a cringe-inducing run-in with a spider, an unfortunate end for a favorite horse, and the hilarious first use of a toothbrush. There is also a Dallas joke that drew quite the laughter from my Dallas audience.

It’s such an unusual film, and it’s presented with a non-traditional pace and rhythm. The moments of laughter surround a core with a dramatic story of destiny, the meaning of life, dreams and visions, and the greed of man. All of this is set to yet another terrific score from Alexandre Desplat and the visually striking photography of Benoit Debie. Director Audiard has delivered a bleak comedy or a comical drama, and he’s done so with more than a fair share of violence. Whether you consider yourself a fan of westerns or not, this one deserves a look.

This entry was posted on Thursday, September 27th, 2018 at 10:03 pm and is filed under Comedy, Drama, Western. You can follow any responses to this entry through the RSS 2.0 feed. You can leave a response, or trackback from your own site.