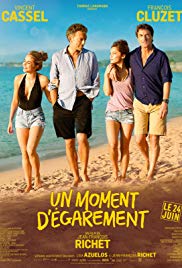 Greetings again from the darkness. In 1977, French Producer-Writer-Director-Actor Claude Berri directed a film version of his own original screenplay entitled IN A WILD MOMENT. In 1984, director Stanley Donen’s (SINGIN’ IN THE RAIN) final feature film was an Americanized remake that inexplicably left Mr. Berri as uncredited. Perhaps that’s how Berri preferred it, since Donen’s BLAME IT ON RIO was atrocious and nearly unwatchable despite a cast that included Michael Caine and a 21 year old Demi Moore. This third iteration, directed by Jean-Francois Richet (who co-wrote the adapted screenplay with Lisa Azuelos) does credit Berri, and returns the material to France where it’s a better fit.

Best friends Antoine and Laurent take their teenage daughters Louna and Marie (who are also best friends) on holiday to Antoine’s childhood home in the Corsica countryside. The house is a bit rustic and neglected, has spotty (at best) internet, includes a family burial plot, and is miles from town. The only neighbor is an elderly gentleman and his roaming dog. The girls aren’t nearly as taken with the serenity as their dads seem to be.

Both dads are loving and protective of their daughters, though the usual teenager-parent squabbles occur regularly. Watching the interactions between the dads and daughters, between the two men, and between the two teenagers is quite entertaining and exceedingly believable. Of course, the core of the story is what happens in one “wild” moment when Laurent is simply being supportive of Antoine’s daughter Louna – and her teenage crush of the older man shifts into seduction. A late night naked frolic on the beach crosses the line that should never be crossed. Laurent instantly regrets the action, and Louna falls “in love” like only a teenager can.

The rest of the movie becomes an uneasy dance of lies, threats, insinuations and betrayals. Most of it is handled with a comedic intentions, and that compounds the feelings of queasiness and disgust that we have towards Laurent and his unacceptable and unforgivable (and illegal) actions. We see the two men frazzled for much different reasons. Though he doesn’t know the identity of the “older man” who took advantage of his daughter, Antoine is obsessed with tracking him down and making him pay. On the other hand, Laurent is desperate to keep the secret from his friend, and that forces him to play along with Louna’s taunting games.

Two of France’s biggest stars, Vincent Cassel (MESRINE) and Francois Cluzet (THE INTOUCHABLES, TELL NO ONE) play Laurent and Antoine, respectively, while Lola Le Lann (age 19 during filming) and Alice Isaaz are Louna and Marie. Mr. Cassel and Ms. Isaaz are especially effective – he in a no-win role, and she leaving us wanting even more characterization.

Though it was filmed more than 3 years ago, it’s now getting a second life. Original writer Claude Berri is probably best known for his stellar work on JEAN DE FLORETTE and MANON OF THE SPRING, and we can’t help but think his script would work better in contemporary times if the comedy turned much darker and made it abundantly clear that Laurent’s actions were entirely unacceptable – instead of leaving his response to young Louna’s come-on as understandable. The film is produced by Thomas Langmann, the son of Claude Berri, and kicks off with the beautiful and familiar version of “La Mer”, a 1946 song by Charles Trenet.

This entry was posted on Wednesday, September 26th, 2018 at 8:43 pm and is filed under Comedy, Drama, World Cinema/Foreign. You can follow any responses to this entry through the RSS 2.0 feed. You can leave a response, or trackback from your own site.