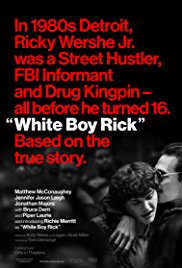 Greetings again from the darkness. When “based on a true story” appears, we can usually bank on either a hero or criminal as the subject. A good person, or a bad one. With this story, we get a teenager who is basically a good kid, but one who does bad things for what he believes are good reasons. It’s likely to test your empathy and judgment. Director Yann Demange (’71) brings us the story of young Richard (Rick) Wershe, Jr through a script from writers Andy Weiss and brothers Noah and Logan Miller.

We begin in 1984, the height of the “Just Say No” era, when Rick (a terrific debut by newcomer Richie Merritt) is a 14 year old living near poverty with his dad and older sister. Mom walked out years ago. Rick helps his dad in the firearm resale business (some legal, some not). Richard Wershe, Sr is played by Matthew McConaughey, who is outstanding as the dreamer who desperately wants a better life for himself and his kids. Unfortunately, the man simply lacks the capacity to do better. Sister Dawn is played by Del Powley (THE DIARY OF A TEENAGE GIRL), and Dawn is an addict who leaves/escapes home with her boyfriend. This is most definitely not “The Brady Bunch”.

Detroit was in the midst of a rapid and tragic decline, and the east side where Rick lived had already hit bottom with crime, violence, drugs and poverty. Rick’s teenage resume would read firearms dealer, known gang associate, FBI informant, gunshot victim, cash-flowing drug dealer, baby daddy, rescuer of sister, and server of life sentence. It was quite a run for someone who hadn’t yet celebrated birthday number 20.

Director Demange shows us how two sides were played against the middle, with Rick being stuck in the middle with no hope for escape. We even see a TV clip of SERPICO for a bit of foreshadowing into life as an informant. What makes the film work, beyond the remarkable true story, is how each of the main characters is humanized to the point that we understand what makes them tick. Dad (McConaughey) is a dreamer who thinks he can sell enough guns to finance a chain of video stores that will be successful enough to keep his family together. Daughter Dawn tries to escape her “loser” dad by numbing herself with drugs and running off with the first guy that will take her. Son Rick takes advantage of his ability to create trust by trying to serve his father, a drug kingpin, the FBI, and himself. These three all seem to have good hearts and best intentions, but nothing every really works out for them – despite dad being a glass-half-full kind of guy

This is also a story of contrasts … especially between black and white in many situations. We learn the difference between ‘black jail time’ and ‘white jail time’, and the FBI obviously chose Rick because he was a white kid who infiltrated a black crime ring – he even gets invited to the local skating rink to hangout, and to Las Vegas for a Tommy Hearns fight. There is also the way Richard Sr sees himself as “above” the criminals as he protests the proliferation and danger of drugs, while then turning around and selling guns to those who peddle drugs. Selective morality.

The FBI recruits Rick to feed them information by threatening to arrest his dad. He is coerced into the world of selling drugs and then later railroaded by the Feds so that they could wash their hands and walk away “clean”. Because of their influence, Rick is later sentenced to life in prison for non-violent offenses. Of course, he was surrounded by violence, and even the victim of it, but it begs the question of whether the punishment fit the crime. We are never sure if we should feel empathy for Rick, disgust at the system, or frustrated and fed up with a society that set this into motion.

The supporting cast runs deep. Bruce Dern and the rarely seen Piper Laurie are Rick’s grandparents, while Jennifer Jason Leigh and Rory Cochrane play the influential FBI agents. This marks a 25 year reunion for McConaughey and Cochrane from their appearance in DAZED AND CONFUSED (1993). Also appearing are RJ Cyler (“I’m Dying Up Here”) as Rick’s friend Boo, Brian Tyree Henry as a detective, and Eddie Marsan and Jonathan Majors as drug dealers.

A surprising amount of humor is mixed in with the gritty crime stuff and family struggles. There is even a comical FOOTLOOSE moment at the drive-in – providing yet another contrast between blacks and whites. Cinematographer Tat Radcliffe (“71) works wonders in some of the least appealing settings you’ll likely find in a movie, and his approach perfectly complements our personal conflicts on who to pull for throughout this quagmire.

This entry was posted on Thursday, September 13th, 2018 at 6:48 pm and is filed under Drama. You can follow any responses to this entry through the RSS 2.0 feed. You can leave a response, or trackback from your own site.