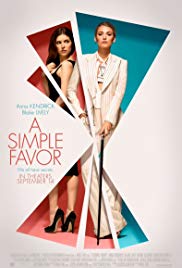 Greetings again from the darkness. In the vein of Gillian Flynn/David Fincher’s GONE GIRL and Paula Hawkins/Tate Taylor’s THE GIRL ON THE TRAIN comes yet another vanishing woman mystery. This latest is based on Darcey Bell’s novel (screenplay by Jessica Sharzer), only this time the biggest twist comes with the selection of Paul Feig as director. That’s right, the director best known for BRIDESMAIDS and other comedies, tackles a ‘whodunit and what did they do’.

Neurotic Mommy Vlogger Stephanie (Anna Kendrick) is a widowed mother to a young son, and she’s the overly perky and perfect mom that causes other parents to sneer and snark behind her back. She’s also so desperate for human connection that she’s willing to befriend Emily (Blake Lively), the martini-guzzling fashion industry executive who is a hands-off mother to Stephanie’s son’s friend. We soon learn that martinis and playdates shouldn’t be mixed.

Stephanie and Emily share dark, personal secrets. Emily discusses the financial woes she and her husband Sean (Henry Golding, CRAZY RICH ASIANS) are experiencing, even though they live in an ultra-modern mansion. He had success with his first novel, but has been hit with writer’s block since marrying Emily. Those secrets pale in comparison to what Stephanie unloads, leading Emily to anoint her with a crass (though quite accurate) label that no one would relish. Of course we later uncover Emily’s truly dark (and deadly) secrets go far beyond possible late payments on the mortgage.

As the two ladies bond, we get the feeling that Emily is playing some type of game with the always-cheerful Stephanie, though to what end we aren’t sure. One day, Stephanie does Emily a “favor” and then Emily disappears without a trace or word. The days pass and a sexual energy develops between Stephanie and Sean, while Stephanie users her Vlog as a tool in her amateur sleuthing.

It’s tough enough to pull off a mystery, but a mystery-comedy is nearly the unicorn of cinema. Director Feig is at his best in the comedic moments – especially those featuring banter between Ms. Kendrick and Ms. Lively. Their scenes together are the highlights of the film … well, those and the French pop soundtrack, including “Ca S’est Arrange” over an opening credit sequence that is itself, worthy of admission. The film is oddly structured, yet still entertaining. Act I is really a dark comedy and budding friendship between polar opposite personality types, while the rest is a messy mystery with some interesting elements.

Strong support work comes courtesy of Andrew Rannells, Aparla Nancherla, Kelly McCormack, and Jean Smart, though two standouts are Rupert Friend (“Homeland”) as Emily’s boss and a character seemingly straight out of ZOOLANDER, and Linda Cardellini (“Bloodlines”) as an unhinged artist tied to Emily’s past. The downside is that most of these scenes add to the comedy-sketch feel, which clashes so harshly with the mystery element that the sharp edge needed in the script becomes quite dulled.

Most every director dreams of being Hitchcockian, and that dream tends to push them towards this genre. Unfortunately, most end up disappointed, their films end up disappointing, and the genius and difficulty of what Hitchcock achieved is reinforced. It’s clear Director Feig is a fan of the genre, as he includes nods to DIABOLIQUE, GASLIGHT, DOUBLE INDEMNITY, and even Nancy Drew. However, acknowledging classic noir isn’t enough to qualify for the label. The film has its moments, Ms. Kendrick is once again stellar in her role, and most viewers will find it entertaining despite the messiness.

This entry was posted on Thursday, September 13th, 2018 at 6:08 pm and is filed under Comedy, Drama. You can follow any responses to this entry through the RSS 2.0 feed. You can leave a response, or trackback from your own site.