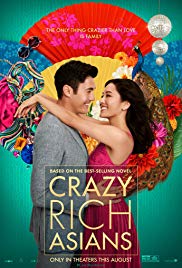 Greetings again from the darkness. With so much attention on this being a rare mainstream movie with an “all Asian cast”, it’s possible to lose sight of the fact that it’s much more than this generation’s THE JOY LUCK CLUB (1993). Director John M Chu has delivered a very entertaining, though a bit slick and glossy, crowd-pleasing romantic comedy with touches of cultural awareness. It also features a few noteworthy performances, including a star-making turn from Constance Wu (“Fresh Off the Boat”).

Based on the best-selling novel by Kevin Kwan, the screenplay is written by Peter Chiarelli (THE PROPOSAL) and TV writer Adele Lim. Rachel Chu (Constance Wu) is an energetic, American-born Chinese economics professor, and her boyfriend Nick Young is played by big screen newcomer Henry Golding. A successful and confident person on her own, Rachel, having been raised by a hard-working single mother (who fled China while pregnant), assumes her charming and handsome boyfriend is equally grounded. It’s not until she agrees to accompany him to Singapore for his best friend’s wedding that she begins to pry the truth – most of the truth – out of him. See, Nick and his family are quasi-royalty in Singapore … one of the wealthiest families in the city and country.

Upon arriving, Rachel quickly learns that Nick’s mother is certainly not open to the idea of her son, the company’s heir-apparent, having anything to do with a woman lacking the required pedigree – namely money and a Chinese legacy. Michelle Yeoh (CROUCHING TIGER HIDDEN DRAGON) plays the icy Eleanor Young, and is quite elegant in her disdain for Rachel, and in capturing the relationship between Asian mother and son. Some of the best scenes are the interactions between Rachel and Eleanor – each so eager to succeed in their polar opposite missions. Facing widespread accusations of gold-digging, Rachel retreats to the comfort of her old college friend Goh Peik Lin, played by a fast-talking and quite hilarious Awkwafina (OCEAN’S 8).

The humor is prevalent throughout, with some of it being quite outrageous. Ken Jeong and Koh Chieng Mun play Peik Lin’s parents … the caricatures of new money. Jimmy O Yang is the high-roller never-grown-up frat boy type responsible for the outlandish bachelor party; Nico Santos is Oliver, the self-titled ‘rainbow sheep of the family’; and Ronnie Chieng is the obnoxious family member everyone avoids. The comedy provided by this group prevents the dramatic elements from ever being too weighty for viewers. This holds true even with the short-changed sub-plot featuring Nick’s beautiful sister Astrid (a scene-stealing Gemma Chan) and her disintegrating marriage to another “outsider”.

Opulence and obscene wealth is on full display, leaving us a bit unsure (by design) exactly where the emphasis should be placed on the title. Although it has the required elements of a fairy tale, it’s certainly not run-of-the-mill. Cinderella allowed a kind-hearted woman to be rescued from slave labor and a basement bed. This Cinderella story doesn’t exactly rescue Rachel, who is a strong, self-made woman. Instead, it ups the ante by having her harshly judged … while in fact, she is the one who should be sitting in judgment – first of a boyfriend who was never honest, and then with a family who assumes she’s not good enough to be one of them.

In a tip of the cap the aforementioned THE JOY LUCK CLUB, Lisa Lu (now 91 years old) plays Kevin’s grandmother, the matriarch of the family, and one who has played a role in making Eleanor the protector of family and tradition. Eleanor’s guiding philosophy and contempt towards Rachel is summed up in her line, “All Americans think about is their own happiness”. It’s one of the moments where we do wish the film would dig a bit deeper and further explain the traditions and cultural differences that cause such venom spewing towards Rachel.

Director Chu has had a stream of poorly reviewed films (NOW YOU SEE ME 2, JEM AND THE HOLOGRAMS, G.I. JOE: RETALIATION, STEP 2), but that likely stops here. His social media montage early in the film is a visual feast, and the camera work (by Vanja Cernjul) over Singapore is stunning. The soundtrack offers Asian versions of some well-known songs, including Cheryl K singing “Money (that’s what I want)”, a Berry Gordy song which we are accustomed to hearing sung by John Lennon. Credit goes to casting as well, since Ms. Yeoh and Ms. Lu are Asian acting royalty, and Ms. Wu and the dashing Mr. Golding are sure to see their careers skyrocket.

The director and producers are also to be commended for making the rare decision of choosing art over money. They were so committed to the film finding a theatrical audience that they turned down huge bucks from Netflix for the rights. It’s a risk that will likely payoff for them. Is it a simple love story made complicated by family, economics, tradition, and class differences … or is it a story of tradition and wealth that attempts to salvage the purity of a love story regardless of class? Either way, it’s a relatable story and one that will surely entertain most anyone who watches. As a bonus, you’ll pick up a banana joke that you’d best not repeat.

This entry was posted on Thursday, August 16th, 2018 at 10:33 pm and is filed under Comedy, Drama, Rom-Com. You can follow any responses to this entry through the RSS 2.0 feed. You can leave a response, or trackback from your own site.