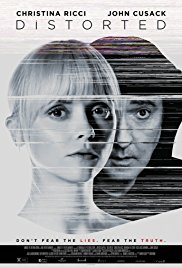 Greetings again from the darkness. Being startled awake by a nightmare is disconcerting for all of us. When that dream is strobe-like with flashes to a personal tragedy, the horrifying images carryover into daily life, impacting one’s mental stability.  Such is the new-norm for Lauren (played by Christina Ricci) as she attempts to recover from a disaster of which we are only provided glimpses and hints until later in the film (although it’s pretty obvious). Lauren admits to being scared to rejoin the world – she hasn’t even been able to resume putting her art on canvas.

Director Rob W King (HUNGRY HILLS, 2009) teams with writer Arne Olsen (whose work in the 1990’s included COP AND A ½, RED SCORPION, MIGHTY MORPHIN POWER RANGERS: THE MOVIE) in an attempt to deliver a high-tech psychological thriller … a sub-genre that has yet to be successfully conquered, cinematically speaking. Lauren and her husband, played by Brendan Fletcher, decide the best move for her sanity and their marriage is to move from the city to the suburbs. They choose The Pinnacle, a luxury condo with ultra high-tech and modern amenities so extreme it’s known as “the smart building”.

Typically having a building be the villain doesn’t work out so well from a story-telling perspective, so of course, paranoia and conspiracy theories are dwelled upon. An obvious choice of the “Beautiful Dreamer” song is repeatedly slipped into scenes to cause Lauren further queasiness. As she becomes increasingly suspicious, and convinced evil is afoot, she crosses paths with a mysterious dark web figure played by John Cusack – a character so predictable that he whispers in conversations, wears a black hoodie, and works in a secret computer lair. As others try to convince Lauren her medications for depression are either too much or too little, Cusack feeds her the age old line … you aren’t paranoid if they are watching you.

Christina Ricci has been acting since she was 10 years old, and here she performs admirably in a film that, bottom line, doesn’t deliver. The movie has the vibe of a cheesy TV show, kind of a rip-off of “Westworld” or “I, Robot”, though it does tease us with the possibilities of electronic hypnosis and manipulation through subliminal images. Our ever-increasingly digital world, and the dangers that come with such power, are a real world problem that, for whatever reason, just hasn’t transferred well to the big screen yet.

This entry was posted on Saturday, August 11th, 2018 at 12:17 pm and is filed under Drama, Thriller. You can follow any responses to this entry through the RSS 2.0 feed. You can leave a response, or trackback from your own site.