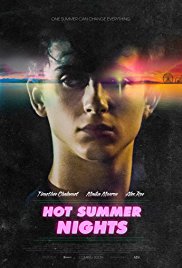 Greetings again from the darkness. Crime, Romance and Bromance battle it out in the summer of 1991, accompanied by music from the 1970’s, influenced by classic films of the 1980’s and 90’s, and starring 4 rising young stars of today. The debut feature film from writer/director Elijah Bynum comes across as the work of a film and music fanboy concerned with not leaving out any ideas in his only opportunity to make a movie. He shows enough here to likely justify another chance, but we can’t help but wonder if assistance from a mentor might have fine-tuned this into a nice little gem, rather than a blip on the resume of the shooting stars he’s working with.

Fresh off his Oscar nominated performance in CALL ME BY YOUR NAME, Timothee Chalamet stars as Daniel, a socially awkward 18 year old. After the death of his beloved father, Daniel’s mom ships him off for the summer to live with family in Cape Cod – yet another place where he will be an outsider as neither a ‘Townie’ nor ‘Summer Bird’ (the wealthy preppies in summer homes). An odd meet-cute kicks off the bromance between Daniel and local heartthrob/legend and dime-bag pot dealer Hunter Strawberry (Alex Roe, FOREVER MY GIRL). It’s also the beginning of a business relationship that both showers them with cash and puts them on the road to ruin. Hunter’s estranged sister McKayla is the local object of desire for the male population. Played by Maika Monroe (IT FOLLOWS), McKayla is the town vixen who ultimately and predictably falls for Daniel, unaware of his business dealings with her bad boy brother.

Also in the mix here are Emory Cohen (so good in BROOKLYN) as Dex, the no-nonsense “supplier” who pushes the Hunter and Daniel dealings to greater heights, Thomas Jane as the local law enforcement presence, William Fichtner as the coke dealer Daniel tangles with, and Maia Mitchell as Hunter’s love interest. There is also the fallout from recently deceased parents for Daniel, Hunter and McKayla, as well as the impending storm (now known as Hurricane Bob).

An air of familiarity is not uncommon in movies, but this one is downright creepy in how many films it seems to mimic in either tone, style or content. The romance between Daniel and McKayla is the least effective story line. We want to know more about the brother-sister relationship, and are disappointed that the uber-talented Maika Monroe is given little to do other than bat her wicked eyes. It plays like a Greek tragedy where the only question is whether the tropical storm will beat the group’s self-destruction.

This summer story is billed as ‘coming of age’, but that description doesn’t seem to fit unless it refers to the ever-present young narrator whose place in line only becomes clear near the end. There is a nostalgic look and feel to Mr. Bynum’s film, and it’s always nice to have a drive-in theatre play a role; however, his music choices – though terrific to listen to – seem to fit better two decades prior to the setting: Mott the Hoople’s “All the Young Dudes”, David Bowie’s “Space Oddity”, Uriah Heep, Linda Ronstadt and The Modern Lovers. Beyond all of that, we do learn that Hunter Strawberry does not like sprinkles.

This entry was posted on Sunday, August 5th, 2018 at 10:13 am and is filed under Drama. You can follow any responses to this entry through the RSS 2.0 feed. You can leave a response, or trackback from your own site.