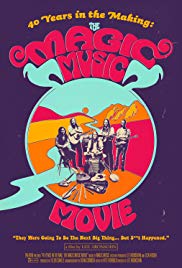 Greetings again from the darkness. Yes, I readily admit to being spoiled. Attending university in Austin, Texas meant (cheap) access to some truly amazing bands and music. Some of these performers went on to various levels of success, while others just kind of vanished. Because of this, I easily relate to Lee Aronsohn’s nostalgic and emotional mission to document the history of his favorite band, Magic Music, and pull off a nearly miraculous reunion concert some 40 years after the band broke up. Sure, his roots are Boulder, Colorado in the early 1970’s, but the connection he feels is universal.

When an early title card informs us that the film’s soundtrack consists of various unreleased songs from 1970-76, you will likely wonder why you should have any interest in a local Colorado band from five decades ago – especially one that never even had a recording contract. When we hear the music for the first time, we begin to understand. It’s a mixture of The Byrds, The Hollies, and CSNY with a dose of Grateful Dead. These hippies produced some beautiful harmonies! And hippies they were. Name another band that was formed at Pygmy Farms, a naturalistic living commune. The band members often lived in school buses in the mountains, only returning to Boulder to play music – often on the college campus.

The history of the band is fairly interesting, and over the years, it was made up of 7-8 different guys with nicknames like Tode, Flatbush, Poonah, and Spoons. They were the opening act for both Jesse Colin Young and Cat Stevens, and turned down their shot at a record deal because they steadfastly refused to add a drummer. Of course, 40 years later, they admit that “drums are pretty cool”. A total lack of business sense stood in the way of the wide world hearing their music. We’ve often known of bands breaking up due to a battle of egos, and this one is no different. After the breakup in 1976, the band members spread out across North America, their music only a distant memory to those who had heard them play live.

Enter TV writer/producer Lee Aronsohn, known for two mega-hits, “The Big Bang Theory” and “Two and a Half Men”. When Mr. Aronsohn became a father, he found himself singing Magic Music songs to his young daughter. Since he could never escape the music of his college years, he decided to see if he could recreate it. This is as much a personal journey for Aronsohn as it is a history of a band that never “made” it. His efforts to track down the band and arrange for the 2015 reunion concert are impressive and quite emotional. While you are likely unfamiliar with Magic Music, there is a certain pleasure and satisfaction in imagining one’s favorite band getting back together for one last jam. It’s obvious this meant a great deal to Mr. Aronsohn, and it’s a reminder of the power of music … and the magic.

This entry was posted on Sunday, August 5th, 2018 at 10:21 am and is filed under Documentary, Musical. You can follow any responses to this entry through the RSS 2.0 feed. You can leave a response, or trackback from your own site.