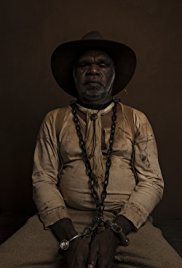 Greetings again from the darkness. For whatever reason, Australia and Westerns seem to go together quite well. Perhaps it’s the naturally beautiful vistas that seem to stretch forever. Maybe it’s the slower pace and the accent that provide the perfect blend of comfort and danger. What matters is that director Warwick Thornton has delivered another gem from the Outback genre.

That previously mentioned blend of slow pace and danger is evident in the opening scene. Fred Smith (Sam Neill) is napping in a rocking chair on his front porch until being startled awake by the snorting of a stranger’s horse only a few feet away. The new neighbor is Harry March (played by Ewen Leslie), an ornery war vet who drinks too much and is racist to his core.

The film is set in the 1920’s, although it doesn’t really matter when. It’s more about the what, the why and the who. The racism on display would be just as believable in contemporary times, though this Outback seems especially far out. Neighbors are rarely seen, and the town is so small, they watch silent movies (The Kelly Gang) and hold court outside on the dusty main street.

Co-writers Steven McGregor and David Tranter have created a story that likely has played out in real life, although hopefully not to this extreme. A series of events occurs: indigenous Australian Sam Kelly (played exceptionally well by non-actor Hamilton Morris) is coerced into helping March put up a fence, March crosses the line with Sam’s wife, a young boy Philomac (played by twins Tremayne and Trevon Doolan) is always stirring up trouble and pilfering things, and a drunk March accuses Sam of hiding the boy and violence erupts leaving the “white fella” dead and Sam and his wife on the run.

Sergeant Fletcher (Bryan Brown) is the local law – he even proclaims “I am the law” – and he forms a posse to track down Sam so he can stand trial. The posse includes March’s friend Kennedy (Thomas M Wright), Sam’s employer Fred Smith (Mr. Neill), and Archie (Gibson John), an indigenous Aussie employed by Kennedy.  Director Thornton uses this chase sequence to paint some extraordinary visions on screen. The natural land is beautiful, and then we come across a stunning and deadly desert in the salt flats. Mr. Thornton acts as co-cinematographer with Dylan River, and the result is a movie that’s a thing of beauty to look at.

Director Thornton uses an array of flashbacks and flash-forwards, sometimes in quick cut form. This approach keeps us on our toes, sometimes foreshadowing, sometimes filling gaps. Against the wishes of the locals, this is a developing country, and many of the locals feel it’s no longer their country – they are kept as laborers, and rarely treated as equals by the new inhabitants. In this world, for this man (Sam), doing the right and necessary thing places he and his family in instant peril. It’s better to run than surrender. The story is very good, though the dialogue is a bit lacking at times. The photography is world class. Though we would have preferred screen vets Bryan Brown and Sam Neill to have more scenes together, the panoramic majesty of Australia is certainly enough … with an added and fitting bonus of Johnny Cash singing “Peace in the Valley” over the closing credits.

This entry was posted on Saturday, April 21st, 2018 at 12:06 pm and is filed under Drama, Western, World Cinema/Foreign. You can follow any responses to this entry through the RSS 2.0 feed. You can leave a response, or trackback from your own site.