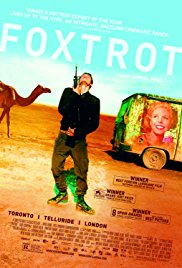 Greetings again from the darkness. The most dreaded knock on the door. Every parent or spouse of someone who has served their country during war time fully understands that indescribable feeling of opening the door and seeing uniformed soldiers waiting to deliver the worst possible news. That knock is how Israeli writer/director Samuel Maoz (LEBANON, 2009) chooses to open his film. Knowing her son Daniel is dead sends Daphna (Sarah Adler) into hysterics, and the experienced messengers know to administer something to help her relax and sleep. Her husband Michael (Lior Ashkenazi, FOOTNOTE) stands stunned, mostly unable to respond.

What follows is one of the most stunning first Act performances we’ve seen on the big screen. That is not hyperbole. Mr. Ashkenazi is remarkable over the first approximately 20 minutes as a parent in shock, experiencing devastating grief. The news is debilitating to his physical and mental being. Additionally, the filmmaking during this segment is quite something to behold. The close-ups add a heavy dose of humanity, while the terrific overhead camera angle presents Michael as trapped, while also adding to the disorientation that is so key. The one-hour alarm set to remind him to “drink some water” would be humorous if not for the fact that its structure prevents the man from totally breaking down.

The second Act takes us away from Daphna’s and Michael’s contemporary Tel Aviv apartment and plops us into a remote military outpost where 4 young soldiers are charged with guarding a road passage. Thanks to this boring assignment, the young men find ways of adding interest to their days: timing canned goods that roll down the ever-increasing slope of their sinking-in-the-muck domicile container, raising the bar for the periodic camel that lopes by, and giving the rare passers-by a bit of a hard time as their ID’s are checked. ‘Of course, this is war territory, so when something goes wrong, it goes terribly and horrifically wrong.

Our final Act takes us back to the original apartment as Michael, Daphna and their daughter are working to reconcile their feelings and somehow re-assemble the pieces of their shattered lives … though the shifts from that heartbreaking first Act are what sets the script apart from so many movies. Cinematographer Giora Bejach continues the exemplary camera work during this curious segment that leaves us feeling somewhat uncertain at first.

This family is stuck in the war that never ends. Like so many in the area, they carry burdens, guilt and grief that, like the war, also never ends. That first Act is transcendent filmmaking and acting, and the three acts work together as a prime example of the melding of visual and emotional storytelling. Most of the film takes place in one of two locales, and it’s the subtleties in each shot that tell us what we must know. And yes, the foxtrot dance does play a role, but like most of this film, it’s best discovered on your own.

This entry was posted on Thursday, March 22nd, 2018 at 9:07 pm and is filed under Drama, World Cinema/Foreign. You can follow any responses to this entry through the RSS 2.0 feed. You can leave a response, or trackback from your own site.