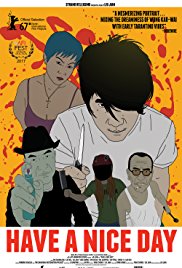 Greetings again from the darkness. One need only read the credits to understand that this is a personal project of Liu Jian. It’s kind of comical to see his name come up as writer, director, illustrator, producer, and editor. He even wrote at least one of the songs featured in the film! An animated film from China that is clearly influenced by the likes of Quentin Tarantino and some modern day madcap caper films offers a nice respite from the typical January releases that hit the theatre.

Jian’s film is a crime thriller with socioeconomic subtext that hovers over each scene. An extended opening credits sequence provides the lay of the land (in this case, city) for the upcoming story. There is very little build up to the crime that ignites the cluster that follows. Xiao Zhang steals a bag filled with one million yuan. The bag belongs to “Uncle Liu”, a feared crime lord and gangster who sends his trusted and ruthless hitman “Skinny” to retrieve his money.

The old adage, “follow the money”, comes into play here. Following the money is not as simple as it sounds, as these aren’t brilliant criminal minds at work here. In addition to Tarantino, thoughts of the Coen Brothers came to mind, as did the Scorsese gem AFTER HOURS. Xiao Zhang has no heroic or altruistic motives. He simply wants to pay for a re-do of his fiancé’s botched plastic surgery. The zaniness around the money involves many colorful participants, each who have their own designs for the bag.

A couple of odd musical interludes involve Shangri-La and some ocean waves, and there is a God vs. Buddha debate that reminds of the infamous Mighty Mouse vs Superman argument in STAND BY ME. The film played well at festivals and at 77 minutes, it’s a briskly-paced chase movie that might have benefited from a bit more humor.

This entry was posted on Thursday, February 1st, 2018 at 8:49 pm and is filed under Animation, Drama. You can follow any responses to this entry through the RSS 2.0 feed. You can leave a response, or trackback from your own site.