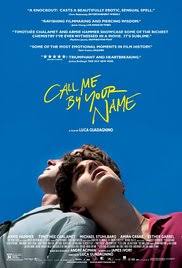 Greetings again from the darkness. Although confusing the two is understandable, there is a difference between a story of romance and a story of love. That’s not to say that the two can’t overlap; in fact, they often do. In movies, romance is the dish most often served because it’s usually more interesting. Watching the flirtatious dance and often awkward exploratory stage of what was once called the rituals of courting offers a writer, actor and director infinitely more possibilities than what we associate with the years of deep connection labeled as love. Andre Aciman’s novel is adapted by James Ivory (of Merchant-Ivory fame, and 3 times Oscar nominated for Best Director) and the script leans heavily on romance … lustful romance, to be specific.

Director Luca Guadagnino (A BIGGER SPLASH, I AM LOVE) is an expert at making movies that engage our senses. His movies delicately tease us – they slowly absorb us into the emotions and feelings of the characters. Very few filmmakers have the skill to subtly seduce the viewer, and draw us into the story so that we are no longer merely observing. It’s nuanced story-telling at the highest level.

Elio’s (Timothee Chalamet) family spends the summer at their estate in northern Italy. You’ve likely never met a more cultured family. His father (Michael Stuhlbarg) is a renowned professor, his mother (Amira Casar) a recognized translator, and Elio himself is a musical prodigy who whiles away the days by transcribing classical music and reading every book he can get his hands on. Oh, he also flirts with the local girls because he is, after all, a 17 year old boy. His intelligence and corresponding wit is of a much older person, standing in stark contrast to his innocence and childlike maturity level with all other pieces of life’s puzzle.

Elio’s world is rocked when his father’s newest research assistant, Oliver (Armie Hammer), shows up. An “Americano” who offsets his extreme politeness with an unrefined “Later” when departing any encounter, Oliver explodes on the scene like a Greek God. He and Elio have an initial passive-aggressiveness towards each other as they test the boundaries for weakness, and more importantly, interest. Things move very slowly as the passion and curiosity brews during their bike rides, walks through the apricot orchards (forbidden fruit), swimming in every watering hole, and competitive banters on intellectual topics. There is a sensuality to most every scene, though those same scenes are filled with unspoken tension.

The sunlit beauty as each summer day passes initially masks the emotions, and the stunning setting, people, colors, and music is accentuated by the camera work of cinematographer Sayombhu Mukdeeprom. Nature is on display in its full glory; not just through trees, sunlight, and water, but in that elusive and unexplained connection between two people so strongly drawn to one another.

Director Guadagnino’s film easily slides into the romantic sub-genre of such films as BLUE IS THE WARMEST COLOR, BROKEBACK MOUNTAIN, and CAROL, and the artistic approach provides a gentleness that even the peach scene can’t undo. Michael Stuhlbarg (who seems to be everywhere these days) has an extraordinary father/son scene near the end which reminds us that each one of us has a story on how life may or may not have turned out as planned. The gut-wrenching pain with sharing that story usually means it remains untold; however, the invaluable lesson is not lost on Elio. First love and first heartbreak bring both emotional ecstasy and emotional devastation, and whether you believe the film’s statement “We have less to give each new person”, you’ll likely agree that the use of Psychedelic Furs “Love My Way” is spot on.

This entry was posted on Thursday, December 21st, 2017 at 7:58 pm and is filed under Drama. You can follow any responses to this entry through the RSS 2.0 feed. You can leave a response, or trackback from your own site.