DR. SEUSS’ HOW THE GRINCH STOLE CHRISTMAS! THE MUSICAL 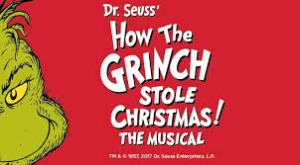 It’s pretty easy to tell if a stage production is “working”. For a tragedy, we hear sniffles emanating from the audience, and for a comedy we hear laughter. When it comes to the re-telling of a family Christmas classic, we watch to see if the kids are engaged. Near the end of this touring version of “Dr. Seuss’ How the Grinch Stole Christmas! The Musical”, most every kid in the theatre is yelling “Christmas” at the stage in a desperate attempt to feed the floundering Grinch the correct line. Of course, Philip Bryan as The Grinch knows exactly what he’s doing, and it’s a brilliant gesture to allow the kids in the audience to believe they are participating … just as we believe The Grinch’s heart has grown as he learns the true meaning of Christmas.

The Dr. Seuss book was first published in 1957, and the iconic animated TV short first aired in 1966. In 2000, director Ron Howard delivered his live-action feature film, and Broadway was home to a hit run in both 2006 and 2007. Since then, there have been numerous tours of the hit stage musical, and many kids and families have been entertained by seeing The Grinch, his dog Max and the Whoville residents brought to life on stage.

“Welcome, Christmas” and “You’re a Mean One, Mr. Grinch” are the two songs familiar from the TV show, and both were written by Albert Hague and Dr. Seuss. There are new elements to the story, and seven new songs with music by Mel Marvin and Timothy Mason (book and lyrics), including “Who Likes Christmas?”, “One of a Kind”, and “It’s the Thought that Counts”. All the songs contribute to the story-telling, but none are especially memorable on their own. There is a twist in approach, as we first meet Max the dog … a much older Max. He acts as our narrator recalling his days with The Grinch, as they are acted out around him. Bob Lauder stars as Old Max, and has a wonderful voice for narration and singing.

Little Cindy-Lou Who and the rest of the Whoville folks are decked out in a pink, red, and white color scheme compounding the chaotic feel created by the holiday season and by having Christmas stolen while they sleep. The Whoville songs are often difficult to understand, despite being performed energetically. The sets (designed by John Lee Beatty) remain true to the original Dr. Seuss book and the centerpiece Christmas tree is especially wonderful.

Of course, what everyone comes to see is The Grinch. His green costume (designed by Robert Morgan) with creepy long fingers is a sight to behold, and Mr. Bryan takes full advantage of the spotlight, both with his physicality and his wide-ranging voice. At various times he reminds of Michael Keaton in BEETLEJUICE (1988), Jim Carrey from the 2000 film, and even The Joker from THE DARK NIGHT (2008). The kids are especially attentive while The Grinch is on stage, as are the much older kids (known as adults) in the audience.

Any production of The Grinch is challenged to overcome the iconic voices of Boris Karloff and Thurl Ravenscroft from the TV version, as these men possessed two of the most recognizable and iconic voices in entertainment history. Director Matt August has been behind both Broadway productions and numerous national tours, and he certainly puts on an entertaining show – assisted here by the live orchestra conducted by Peter Nilson, and some contemporary touches including a laugh-inducing belch, and a hashtag for the milennials. It’s been 60 years since the book was published, and the mean old Grinch and his dog Max can still entertain us.

This entry was posted on Thursday, December 7th, 2017 at 12:16 am and is filed under Articles, Musical. You can follow any responses to this entry through the RSS 2.0 feed. You can leave a response, or trackback from your own site.