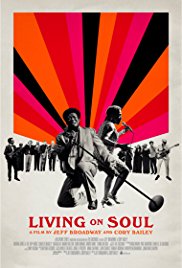 Greetings again from the darkness. Barely a year after the 1969 Woodstock festival, both Jimi Hendrix and Janis Joplin were dead. Fortunately, the movie cameras were rolling to capture their electrifying performances for generations to come. A few years later, director Martin Scorsese (an assistant director on WOODSTOCK) was there to capture on film the final live performance of The Band (and many famous friends) in THE LAST WALTZ. Jump ahead to 2014 and co-directors Cory Bailey and Jeff Broadway were at the historic Apollo Theater to capture the 3 night sold out shows honoring Daptone Records.

The Harlem venue and stage has seen many memorable performances from icons such as James Brown, Ella Fitzgerald and Billie Holliday, but even according to historian Billy “Mr. Apollo” Mitchell, this was an event for the ages. Among those delivering the highest level of soul, funk, gospel and R&B music were The Dap-Kings, Charles Bradley, Naomi Shelton, Como Mamas, Antibalas, The Budos Band, and of course, the great Sharon Jones.

In addition to the energetic and energizing performances, the film mixes in some back story for many of the artists, plus insight from Daptone Records co-founders Gabe Roth (aka Bosco Mann) and Neal Sugarman (they know plenty about funk!). If the on stage dynamics weren’t so amazing to watch, we might wish for even more history being told, but not much can compete with Sharon Jones kicking off her shoes for a rousing rendition of “Get Up and Get Out”.

I promise you’ve never heard a cancer-free proclamation like the one from Ms. Jones, who was also front and center in the 2015 documentary MISS SHARON JONES!. Unfortunately, the cancer returned and she passed away a year after the Apollo shows. It should also be mentioned that Charles Bradley, a centerpiece of Daptone Records passed away just a couple of months ago (September 2017). We can celebrate their performances just as much as the mixture of black and white who perform together on stage, while the cheering and dancing in the crowd comes from a surprising blend of the same. It’s a stark reminder of how music can unify even while most of society fragments.

This entry was posted on Sunday, December 3rd, 2017 at 1:58 pm and is filed under Documentary, Musical. You can follow any responses to this entry through the RSS 2.0 feed. You can leave a response, or trackback from your own site.