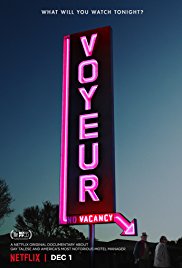 Greetings again from the darkness. We are watching the final product of filmmakers watching a reporter watching a man whose hobby is watching those who don’t know they are being watched. Lacking a single redeeming individual, the film’s creep factor slithers towards 11 on the (“SPINAL TAP”) scale.

It’s understandable if you assume this is the story of a pathetic and disgusting Aurora, Colorado motel owner who, for many years, quietly leered at his guests from a self-constructed perch in the attic. Gerald Foos methodically documented the sexual actions of the Manor House Motel guests, which numbered 2000-3000 per year. If his actions aren’t remarkable (not in a good way) enough, Mr. Foos actually married not one, but two women who were complicit in his hobby.

In 1980, renowned reporter and author (“from age 15 to 80”) Gay Talese received a letter from Gerald Foos, kicking off a three decade relationship culminating in a controversial feature article in “The New Yorker” and a book entitled “The Voyeur’s Motel”. Once Mr. Foos agrees to have his name published, co-directors Myles Kane and Josh Koury jump on board to document the final steps in Mr. Talese’s writing and research process. It’s here that we enter the oddest man cave you’ll likely see. In the basement of Talese’s immaculate Manhattan brownstone is not just his writing office, but also a lifetime of research and writing … boxes and shelves of material that will surely one day be part of a museum or university collection.

The unexpected parallels between writer and subject are made clear. Both are voyeurs and both are collectors. As a journalist, Talese observes the actions of people, while Foos is quite obviously the definition of a Peeping Tom. Talese collects the years of research for his writings, while Foos shows off his extraordinary sports memorabilia collection (also in his basement). Beyond these similarities, what stands out most are the unbridled egos of these two men. Both seemed most focused on getting or keeping their names and stories in the headlines. Of course, Talese has built a career on his name and reputation, while the aging Foos simply sees this as his legacy that somehow deserves historical prominence.

The filmmakers remain more focused on Talese than Foos, and that takes us inside “The New Yorker” where the editors are justifiably concerned about a single-source story – one that without Talese’s name attached would likely have never made it past an initial perusal. The aftermath of publication reminds us that we’ve seen con men before, and there is little joy in being taken on a long ride of deceit. Perhaps the best description of what we see on screen is that it’s a sideshow of ego and the need to be seen (watched).

This entry was posted on Thursday, November 30th, 2017 at 8:13 pm and is filed under Documentary. You can follow any responses to this entry through the RSS 2.0 feed. You can leave a response, or trackback from your own site.