THE MAN WHO INVENTED CHRISTMAS (2017) 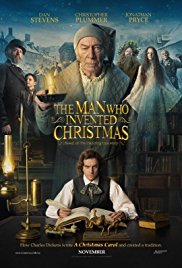 Greetings again from the darkness. Most would agree there is only one Christmas story that surpasses the popularity and familiarity of Charles Dickens’ “A Christmas Carol”, and both have had numerous film and screen adaptations. Rather than offer up yet another film version of the Dickens novella, director Bharat Nalluri (MISS PETTIGREW LIVES FOR A DAY, 2008) instead uses the Susan Coyne screenplay adapted from the non-fiction work of Les Standiford to present the lively and entertaining tale of HOW Dickens wrote his iconic book.

Dan Stevens (BEAUTY AND THE BEAST, 2017) stars as the esteemed writer Charles Dickens, and he bounds from scene to scene like a moody and spoiled Energizer Bunny. Attempts to capture the process behind creative writing usually falls into one of two buckets: dry and boring, or outlandish and over-the-top. Mr. Stevens easily fits into the latter, but as a testament to the strength of the story and supporting cast, we viewers are nonetheless quite entertained.

It should surprise no one that Christopher Plummer steals each of his scenes as Ebenezer Scrooge. What a delight to behold the talented octogenarian as he leaves us wishing for even more of the grumpy and miserly old former partner of Jacob Marley. Jonathan Pryce also excels as Charles’ father John, a charming man who has never quite figured out the economics of life … and whose long ago debt sent young Charles to a work house mixing shoe black. Even as an adult, Charles had recurring nightmares of his time in child labor, and fortunately he was able to use those memories to create many long-lasting stories, each oblivious to generational change.

In 1843 London, the renowned Dickens is coming off three straight flops and experiencing financial woes that are exacerbated by his insistence on the finest materials for the large home he and wife Kate (Morfydd Clark, LOVE & FRIENDSHIP) are renovating. Dickens is in the midst of severe writer’s block, and only the quiet strength of his wife and never-wavering loyalty of friend/agent John Forster (Justin Edwards) are able to keep in from sinking to even lower emotional depths. Screen veteran Miriam Margolyes plays the housekeeper, and Anna Murphy is Tara, the Irish nanny who serves as a muse for Dickens.

Having the characters of the story appear on screen and interact with the writer is a terrific way to explain how the creative mind works, although at times, the sources of ideas, characters and key lines seem a bit too convenient. We often get the feeling that perhaps too much was crammed into the run time, what with the conflicts over money, renovations, family matters, and publishing. The best parts are also the easiest with which to relate – those involving the characters and the story slowly coming together.

Simon Callow plays John Leech, the famed illustrator of the finished novella, and Miles Jupp adds a bit of twisted fun as Dickens’ rival William Makepeace Thackery. There are some interesting lines that add color, such as, “People will believe anything if you are properly dressed”, and “blood of iron, heart of ice”. It’s these pieces that allow us to view this as a journey of self-discovery for the author, and not just a famous story being assembled. The overall trouble with the film stems from that title. It seems we could have expected more than a tease of what Christmas was at the time, and more specifically how “A Christmas Carol” inspired a revolutionary new approach to the holiday. We are left to connect many dots. In fact, Dickens didn’t so much invent Christmas as allow folks to re-imagine it.

Is “A Christmas Carol” the most famous Dickens story? Arguments could also be made for “Oliver Twist”, “David Copperfield”, “Little Dorrit”, “Nicholas Nickelby”, and of course, “A Tale of Two Cities”. What can’t be argued is the brilliance of the writer and the impact of his books. His passion is evident in his determination to self-publish at a time when such practice was a rare as it is commonplace today. The film is rated PG, but younger kids are likely to be confused with the frenetic approach; however, all ages will get a merry kick out of Mr. Plummer’s Scrooge!

This entry was posted on Wednesday, November 22nd, 2017 at 9:47 pm and is filed under Comedy, Drama, Fantasy. You can follow any responses to this entry through the RSS 2.0 feed. You can leave a response, or trackback from your own site.