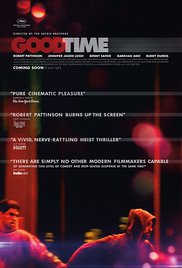 Greetings again from the darkness. The Drifters and later George Benson sang “the neon lights are bright on Broadway”. Well, we aren’t on Broadway, and though they aren’t bright, the neon lights are ever present and crucial to the tone of the latest from brothers and co-directors Benny Safdie and Josh Safdie.

Robert Pattinson stars as Constantine “Connie” Nikas, and turns in a performance unlike anything we have previously seen from him. Connie is protective of his brother Nick (played by director Benny Safdie), and he’s also a grungy unhinged bank robber. He doesn’t look like a man with a plan, but fortunately, Connie is a smooth talker who thinks ‘quick on his feet’. We say fortunately, because he is barraged with an endless stream of danger, catastrophes and near traumatic events as the story progresses.

A botched bank robbery separates the brothers and sends Nick to jail and Connie on the lam. Co-writers Ronald Bronstein and Josh Safdie seemingly take immense pleasure in launching Connie off-the-rails has he desperately attempts to avoid capture while simultaneously figuring out how to spring brother Nick. With a frenetic pace that escalates Griffin Dunne’s misery in AFTER HOURS, Connie’s escapades have him crossing paths with his girlfriend played by Jennifer Jason Leigh (wish she had more screen time), a psychiatrist played by Peter Verby, a new anxious-to-help acquaintance in Taliah Webster, an accidental partner-in-crime played by Buddy Duress, an amusement park security guard played by Barkhad Abdi (“Look at me!”), and a brutish thug played by hip-hop artist Necro.

The pounding, pulsating techno/synth music perfectly complements the unusual tone (almost noirish, and bordering on comedic), feverish pace, and fascinating visuals throughout this hyper-kinetic frenzied trip. Some viewers will be turned off quickly, and those that stick with it will be rewarded with an entertaining crime thriller featuring Pattinson’s best performance to date.

This entry was posted on Thursday, August 24th, 2017 at 8:35 pm and is filed under Drama, Thriller. You can follow any responses to this entry through the RSS 2.0 feed. You can leave a response, or trackback from your own site.