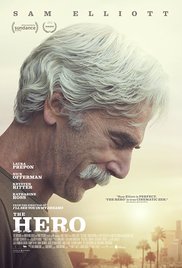 Greetings again from the darkness. It’s considered bad form to gush over a film or actor during a review, but come on … it’s Sam Elliott, dripping masculinity from his signature mustache – beloved by men and women alike. Writer/director Brett Haley (I’ll See You in My Dreams) offers up not just a rare lead role for Mr. Elliott, but also one that seems to closely parallel his actual 45+ year career.

Aging western actor Lee Hayden (Elliott) opens and closes the film in a sound booth, progressively more annoyed at each of the director’s requests for just ‘one more’ take on his voiceover for a BBQ commercial. What happens in between will likely be judged by critics as one cliché after another, but it’s also the chance to see an actor north of 70 years old fight through a wide range of emotions and situations, each grounded in struggles many of us will face at some point in our lives.

When the doctor delivers the worst possible news regarding a recent biopsy, Lee has every intention of telling his ex-wife (the rarely seen these days Katharine Ross, Elliott’s real life wife of 30+ years) and estranged daughter (Krysten Ritter). Neither attempt goes well, and instead, Lee finds himself on the sofa of child actor-turned-drug dealer Jeremy Frost (an admirable stage name for Nick Offerman’s character) toking on a joint and watching classic silent films. In fact, the recurring themes of beach, blunt, bourbon and Buster (Keaton) are there to solidify the notion that Lee is a creature of habit, and it’s meeting Jeremy’s customer Charlotte (Laura Prepon) that finally jolts him back to life.

Charlotte is a stand-up comedian and would-be poet who has an unusually accelerated attraction to older men. Of course, she can’t resist Lee, and a May-December romance develops in his last chance at happiness (cliché number 7 or 8, I lost track). Charlotte accompanies him to an event where an obscure group of western film lovers is presenting Lee with a Lifetime Achievement award, and she also becomes somewhat of a life adviser – counseling him to come clean with his family. To ensure no viewer misses out on the sentimentality, Charlotte recites the poems of Edna St Vincent Millay and reminds us all that buying more time is usually the right call.

As Lee and Jeremy munch on Chinese food after the cloud of smoke has cleared, Lee has a great rebuttal to Jeremy balking at hearing his story: “A movie is someone else’s dream.” That sentiment is something I try to hold onto whenever reviewing a movie, as it’s important to remember that it’s the artist (writer, director, actor) who is taking the risk by putting their work on display. It also fits in with the theme here of finding one’s place – putting one’s legacy in order. Contemplating morality and softening regrets are natural steps to take, and each of us should make it easier for those trying. So, scoff at the sentimentality and clichés if you must, but the messages here are loud and clear and important.

Although I had previously seen him (oh so briefly, accusing Redford of cheating) in Butch Cassidy and Sundance Kid (1969), and then again in the late night cult classic Frogs (1972), it was his breakout role in Lifeguard (1976) that made me a Sam Elliott fan for life. Depending on your age, your introduction to his screen presence might have been as Cher’s biker boyfriend in Mask (1985), Patrick Swayze’s pugilistic partner in Roadhouse (1989), Virgil Earp in Tombstone (1993), the wise stranger at the bowling alley in The Big Lebowski (1998), the Marlboro Man in Thank You for Smoking (2005), delivering a gut-punch as Lily Tomlin’s former lover in Grandma (2015), or as Timothy Olyphant’s nemesis in “Justified”. Elliott is the paradigm for the pregnant pause, and combined with that baritone drawl, ultra cool demeanor, bushy mustache, and head-cocked-at-an-angle glance, he undoubtedly won you over to believe him in whatever role it was … because that’s how icons become icons.

Paraphrasing a line in the film: the Sam Elliott voice can sell anything – pot, bbq, Dodge, clichéd roles – and I happen to be buying (gushing).

This entry was posted on Saturday, June 17th, 2017 at 4:28 pm and is filed under Drama. You can follow any responses to this entry through the RSS 2.0 feed. You can leave a response, or trackback from your own site.