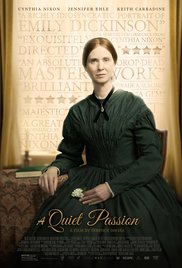 Greetings again from the darkness. We open on a young woman standing strong during a critical moment at seminary school. It’s kind of a clunky start in an overly-dramatic and stagey sense for the film, but Emma Bell sets the standard for the future behavior of Emily Dickinson. What follows is a period drama with minimal costuming effects, but rather a fitting onslaught of language and words – most of which comes courtesy of Ms. Dickinson and her mighty pen.

I’ve often viewed Emily Dickinson as an early feminist whose beliefs and intentions were stifled by the era in which lived, as well as the depression that seemed to cloak most of her days. She was definitely an odd/unusual person and clearly stood for women’s equality at a time when her own poems were published anonymously to avoid scandal and backlash for the paper. Writer/director Terence Davies (The Deep Blue Sea, 2011) shows interest in glamorizing neither the times nor the writer, and Cynthia Nixon seizes the opportunity to capture the essence of a gifted woman who at best, could be described as a societal misfit and a genius.

The terrific cast also includes Keith Carradine as Emily’s proud father, Jennifer Ehle as her (yin-yang) sister Vinnie, and Duncan Duff as brother Austin. Emily’s rare forays beyond familial boundaries are mostly via garden strolls with her wise-cracking friend Miss Buffum, played with zeal by Catherine Bailey. There is also a tremendous 3:00am scene between Emily and her sister-in-law Susan (Jodhi May), which provides the best possible self-analysis by Ms. Dickinson (outside of her writings). She confesses to her new family member, “You have a life, I have a routine.” This insightful line seems to carry no sadness for Emily.

The first third of the film features some low-key zingers that rival anything from Whit Stillman’s superb Love & Friendship, though the balance of the film takes a turn towards the serious and somber while focusing more on Faith and Death and Emily’s controversial stances. She embraces the label of “no-hoper” and continues on with her observations of a life she barely leads. While the language and words are the stars here (along with Ms. Nixon), there is a very cool effect as the characters seamlessly age before our eyes in a series of portrait poses, vaulting the timeline headfirst into Emily’s descent into self-imposed isolation. It’s a very well done biopic that requires your ears be in prime form.

Ms. Dickinson died in 1866 at the age of 55, and the film helps us understand that the contradictions and confusion associated with religion does not solely belong to our modern times. This might best be explained when Emily’s aunt wins an argument by proclaiming that “hymns aren’t music”. Mr. Davies delivers a small film that is large in thought and beautiful in look.

This entry was posted on Thursday, May 18th, 2017 at 5:50 pm and is filed under Drama. You can follow any responses to this entry through the RSS 2.0 feed. You can leave a response, or trackback from your own site.