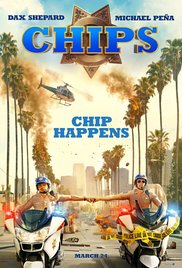 Greetings again from the darkness. In a Hollywood self-congratulatory world that considers sequels, reboots and remakes as creative projects; and imitation as the most sincere form of flattery … not to mention the safest hedged bet … it’s not in the least surprising that we now have a film version of “CHiPs”, a lightweight and popular TV show that ran from 1977 through 1983. What should be surprising is that a studio entrusted Dax Shepard with the ultimate slash role of Director/Writer/Producer/Actor for this contemporary version.

Of course, as with film versions of “21 Jump Street” and “Starsky and Hutch”, the target audience isn’t really those who watched the original TV series, but rather the group of big-spending millennials who seem to thrive on raunchy humor, while placing minimal value on a coherent or interesting story. Buddy cop films that blend tense drama, wise-cracking partners and eye-widening action have long been popular, with the jewel of the genre being Lethal Weapon. This latest entry does nothing to threaten the now 30 year reign of Mel Gibson and Danny Glover.

Dax Shepard stars in his own film as Jon Baker, now reinvented as a former X-games motorcycle champ who is attempting to save his long-fizzled marriage by becoming a cop. The rookie’s partner is undercover FBI Agent Frank “Ponch” Poncherello played by Michael Pena. Each has their own personal issues: Jon is addicted to prescription painkillers, and Ponch struggles to control certain urges … and unfortunately for viewers, the two spend an inordinate amount of time discussing these issues.

The crime wave they are attempting to bust involves a corrupt cop. Seeing that Vincent D’Onofrio is in the cast immediately takes away any mystery about the bad guy’s identity, but were there any doubt, the film exposes him in the first action sequence. After that comes the onslaught of verbal sparring, explosions, gunplay and one especially gory moment.

Cars and bikes are vital here, though it seems that the motorcycle stunts could have been jazzed up a bit, and we certainly expected more cameos than the mandatory one near the end. The original series thrived on being ‘tongue in cheek’, and Mr. Shepard’s version brings new meaning to the phrase. The opening credits state “The California Highway Patrol does not endorse this film. At all.” It’s an understandable stance.

This entry was posted on Thursday, March 23rd, 2017 at 7:57 pm and is filed under Action, Comedy, Drama. You can follow any responses to this entry through the RSS 2.0 feed. You can leave a response, or trackback from your own site.