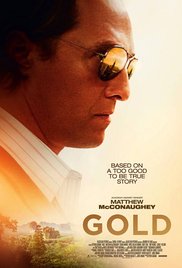 Greetings again from the darkness. What is your dream worth? Would you sell it? How much would it take? Kenny Wells is a dreamer. Sure, he is a third generation mining prospector, but he’d rather tell you the story of his grandfather and those mules than actually dig in the dirt himself. In fact, talking is what he does best (and most often). It’s the first film from director Stephen Gaghan since his 2005 Syriana, for which he received an Oscar nomination for his screenplay. This time he collaborates with writers Patrick Massett and John Zinman to deliver a blend of The Wolf of Wall Street and The Treasure of the Sierra Madre, with a dash of The Big Short and American Hustle.

Matthew McConaughey is nearly over-the-top in his portrayal of Kenny Wells, a prospector with the spirit of a wildcatter. This isn’t ‘sexiest man alive’ McConaughey, but rather ghastly Matthew. Balding dome, protruding gut, and hillbilly teeth … it’s all there wrapped in a sweaty cheap suit and accessorized with booze and cigarettes. The actor seems to relish the role.

The story kicks off in 1981 Reno, showing Kenny as an eager to please son to his distinguished father played by Craig T Nelson. Flash forward to 1988 and Kenny’s struggling through the recession in an effort to keep his dad’s company alive. His loyal employees work the phones from the musty cocktail lounge where Kenny’s girlfriend Kay (Bryce Dallas Howard) waits tables.

Billed as “inspired by true events”, Kenny goes to great extremes to meet up with legendary geologist and miner Mike Acosta (played by Edgar Ramirez). These two need each other and team up to sniff out a gold mine down the river in Indonesia. What follows is despair, desperation, malaria, elation, big investment bankers, a hostile takeover attempt, political maneuverings, heartbreak, pride, and a surprising twist. It’s a wild ride and doesn’t always take you where you assume it’s headed.

The supporting cast includes Corey Stoll and Bill Camp as part of the Wall Street investment group, Stacy Keach as a supporter and investor of Wells, Toby Kebbell as an FBI agent, and Rachael Taylor as a contrast to Bryce Dallas Howard’s working class character. Also appearing is Bruce Greenwood as the king of the prospector hill and featuring an awful accent that adds to the borderline cartoon feel of some scenes.

Hope and greed could be viewed as a disease, but for Kenny Wells, we are urged to believe it’s all about the dream. What’s left if you sell off that dream? Instead, if you aren’t part of the fraud, maybe you live for that moment on stage when they present you the Golden Pick Axe award, and you finally believe your father would respect you. Iggy Pop and Danger Mouse collaborate on an included song, which somehow fit in with the string of 1980’s music that plays throughout. The rapid and numerous changes of direction will keep you entertained, though we do wonder how much truth from the Bre-X scandal was actually used, and how much was just a chance for McConaughey to go all out.

This entry was posted on Thursday, January 26th, 2017 at 8:31 pm and is filed under Comedy, Drama, Thriller. You can follow any responses to this entry through the RSS 2.0 feed. You can leave a response, or trackback from your own site.