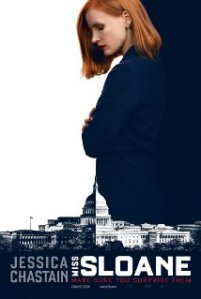 Greetings again from the darkness. Timing can be crucial for a film attempting to capitalize on a hot social or political topic or event. One gets the feeling that the filmmakers were excited to open this film on the heels of a Hillary Clinton victory … a story about a powerful woman, laser-focused on her mission to push through gun-control legislation. With an unexpected election outcome, director John Madden (Shakespeare in Love, The Best Exotic Marigold Hotel) and first time screenwriter Jonathan Perera may just luck out since their film can alternatively be interpreted as a scathing commentary on a corrupt existing system … the single biggest reason for that surprise election result.

By now we have become accustomed to stellar performances from two-time Oscar nominee Jessica Chastain (Zero Dark Thirty). Here she plays super-lobbyist Elizabeth Sloane – always impeccably dressed while spouting the voluminous dialogue and quick quips that make up this workaholic, dedicated-only-to-winning viper who rules the snake pit known as politics. When her big firm boss (Sam Waterston) tries to strong arm her into working with the NRA to quash the proposed gun-control legislation … encouraging her to ‘get women excited about guns’ … she quickly takes her competitive nature (and most of her staff) to the opposition, resulting in escalated political warfare.

Much of this plays like an Aaron Sorkin spin-off, but it’s surprising how few movies have focused on the fascinating world of lobbyists. Thank You for Smoking (2005) and Casino Jack (2010) are probably the most widely seen, but it’s Michael Clayton (2007) that seems to have the most in common tonally with this look at ethics (or lack thereof), conniving strategy, and backroom maneuverings.

Ms. Chastain owns the film and the role, and there is strong supporting work from Mark Strong (as her new boss), Gugu Mbatha-Raw (making the most of a few scenes), John Lithgow (as the Senator running the Congressional hearing), Michael Stuhlbarg (as a worthy adversary), Jake Lacy (as Sloane’s only diversion), Alison Pill (her assistant), Dylan Baker (a talk show host), and David Wilson Barnes (her attorney). It’s an impressive group that adds substance to the project.

Do the ends justify the means? Is anyone as ambitious and adept at political games as Elizabeth Sloane? Are ethics really this compromised in the world that creates our laws and policies? However you choose to answer those questions, a look at the misplaced priorities of our elected officials … and the influence of powerful lobbyists … are absolutely worthy of our attention, and undoubtedly contributed to the biggest election surprise in recent memory.

This entry was posted on Thursday, December 8th, 2016 at 9:38 pm and is filed under Drama, Thriller. You can follow any responses to this entry through the RSS 2.0 feed. You can leave a response, or trackback from your own site.