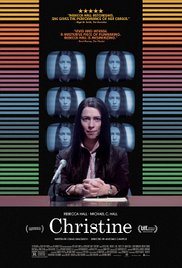 Greetings again from the darkness. On July 15, 1974, television news reporter Christine Chubbuck read a prepared statement and then committed suicide on-air by putting a gun to her head and pulling the trigger. You may not recognize her name, but you have likely heard the story … it’s no urban legend. Director Antonio Campos and writer Craig Shilowich offer up a biopic with some insight into Ms. Chubbuck’s personal and professional life so that we might better understand what drove her to such a public and tragic end.

Rebecca Hall takes on the titular role (don’t mistake this for the 1983 John Carpenter/Stephen King film), and despite her usual stilted on screen mannerisms, she delivers what is an emotionally raw and nuanced performance that is the best of her career … and one that keeps us glued to a story of which we already know the ending. We see a woman dedicated to her vision of the profession, while being maddening to those who know her, love her, and work with her. She has an awkward intensity that compounds her lack of social skills and an ongoing struggle with depression. Somehow, Ms. Hall allows us to understand the personal and professional struggles and how things could have spiraled into hopelessness for Christine.

The commentary on the early days of tabloid journalism (“If it bleeds, it leads”) is especially interesting given how the current Presidential campaigns have been covered more than 40 years after the film is set. One might also note the parallels to the character of Howard Beale in Network (1976) … though Christine Chubbuck was less vociferous and never took to yelling “I’m mad as hell, and I’m not going to take it anymore” while on camera (though she evidently felt that way).

Support work comes from Tracy Letts as the frustrated news director, Michael C Hall as the mixed-signals anchorman on whom Christine has a quiet crush, J. Smith-Cameron as her mother and housemate, Maria Dizzia as her friend and co-worker, and Timothy Simons as the misunderstood and ignored weatherman.

The film clearly makes the point that Christine was a misfit in her work and personal life, and though some of the timeline and known specifics are either re-worked or ignored for artistic purposes, Ms. Hall must be commended for highlighting the effects of depression. Even the best meaning friends and family can unintentionally make things worse. We see a clip of Walter Cronkite’s actual report of her death, and Christine’s own words – “The latest in blood and guts” – were actually ahead of her time.

This entry was posted on Thursday, November 3rd, 2016 at 10:40 pm and is filed under Drama. You can follow any responses to this entry through the RSS 2.0 feed. You can leave a response, or trackback from your own site.