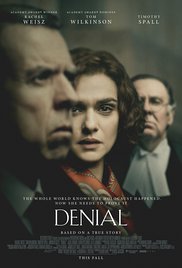 Greetings again from the darkness. Guilty until proven innocent. It’s a concept that is inconceivable to Americans, yet it’s the core of British Law in libel cases. When once respected British historian David Irving accused American scholar and educator Deborah Lipstadt of libel, based on her book that accused him of being a Holocaust denier, the burden fell to Lipstadt to prove not just that Irving’s work was a purposeful lie, but that the Holocaust did in fact take place.

This is the first theatrical release in about 15 years for director Mick Jackson, who is best known for his 1991 L.A. Story and 1992 The Bodyguard, and for his Emmy-winning 2010 TV movie Temple Grandin. The script is adapted, from Deborah Lipstadt’s book, by playwright David Hare (The Reader, 2008), and the courtroom dialogue is taken directly from trial records and transcripts. Like most courtroom dramas, the quality relies heavily on actors.

Rachel Weisz plays Ms. Lipstadt with a brazen and outspoken quality one would expect from a confident and knowledgeable Queens-raised scholar. Timothy Spall bravely takes on the role of David Irving, a pathetic figure blind to how his racism and anti-Semitism corrupted his writings and beliefs. Tom Wilkinson is the barrister Richard Rampton who advocates for Ms. Lipstadt and Penguin Books in the libel suit brought by Mr. Irving. Andrew Scott plays Andrew Julius, the noted solicitor who also handled Princess Diana’s divorce from Prince Charles. Others include Caren Pistorius as an idealistic member of the legal team, and Alex Jennings as Sir Charles Gray – the sitting judge for the case.

Of course for any sane human being, it’s beyond belief that a Holocaust denier could achieve even a modicum of attention or notoriety, much less have the audacity to bring suit against a scholar who simply published descriptions of that denier’s own words. Rather than come down to fact vs opinion, a more fitting title would be opinion based on fact vs opinion based on a lie. If the words used against Irving in Lipstadt’s books are true, she would win the case. In other words, she had to prove that he was a racist, an anti-Semite and knowingly misrepresented the facts in his works as a Holocaust denier.

Mr. Jackson’s film begins with Ms. Lipstadt as a professor in 1994 at Emory University (where she remains employed to this day). In 1996, the lawsuit is filed, and in 1998, Lipstadt and Rampton visit Auschwitz. Though the courtroom drama and corresponding legal work takes up much of the film, it’s this sequence filmed at Auschwitz that is the heart and soul of the film. Very little melodrama is added … the scenes and the setting speak for themselves.

The trial finally started in 2000, and as always, it’s fascinating to compare the British court of law and process with that of the United States. The formality is on full display, but nuance and showmanship still play a role. The film and the trial ask the question … are you a racist/anti-Semite if you truly believe the despicable things you say/write? This is the question that the judge wrestles with (and of course, “Seinfeld” had a spin on this when George stated “It’s not a lie, if you believe it”).

It’s been a rough movie week for me with the Holocaust and slavery (The Birth of a Nation), but it’s also been a reminder of just what wicked things people are capable of, and how current society continues to struggle with such inexplicable thoughts. Kudos to Ms. Weisz, Mr. Wilkinson and Mr. Spall for excellent performances, and to Mr. Hale for the rare inclusion of a Chappaquiddick punchline.

This entry was posted on Thursday, October 6th, 2016 at 8:15 pm and is filed under Drama, World Cinema/Foreign. You can follow any responses to this entry through the RSS 2.0 feed. You can leave a response, or trackback from your own site.