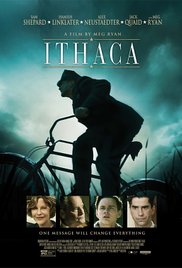 Greetings again from the darkness. The source material is the 1943 novel “The Human Comedy” from Pulitzer Prize winning writer William Saroyan; and it’s the directorial debut of Meg Ryan, the one-time ‘America’s Sweetheart’ who reunites with her Sleepless in Seattle co-star Tom Hanks (in a ghostly cameo). Due to these juicy ingredients, we can be excused if our expectations are a bit high.

As a viewer, it’s easy to relate to the emotions of young Homer McCauley (Alex Neustaedter) as his messenger job expedites the disillusionment that often accompanies adulthood. While Homer becomes more disenchanted the more he learns, we feel let down with each successive sequence. The adapted screenplay from Eric Jendresen never picks a direction, and instead teases us with numerous pieces from the novel with little follow through on any.

Homer’s dad (a very brief Tom Hanks apparition) has recently passed, and with his older brother Marcus (Jack Quaid, son of Meg Ryan and Dennis Quaid) off at war, Homer takes it upon himself to secure a job to help support his saintly and melancholy mother (Meg Ryan), his older sister Bess (Christine Nelson) and his little brother Ulysses (an energetic Spencer Howell). He pledges to be the best bicycle messenger ever when hired at the local telegraph company run by Tom Spangler (Hamish Linklater) and old-timer (grumpy and frequently inebriated) Willie (Sam Shepard).

Being that it’s war time, some of the telegraphs Homer must deliver are the worst possible news for the parents on the receiving end. As the film progresses, we see the light slowly go out of Homer’s once bright eyes. The accelerated coming-of-age aspect is at its best when his father-figure Willie brusquely tells him “You are 14 years old and you’re a man! I don’t know who made you that way.” It’s the most poignant moment of the film and the closest we get to a real theme.

The letters Homer receives from older brother Marcus contribute to his understanding of the world and the reading of the letters serves the purpose of story narration. The film is nostalgic and idealistic, but so unfocused that we are never able to fully connect with any of the characters. We are caught off guard when Homer proclaims his mother as the nicest person ever, although she has offered even less guidance than Forrest Gump’s mom. Ithaca, Ulysses, and Homer … we can’t miss the mythology ties, as well as the importance of home, but it always feels like something is missing.

In 1943, six time Oscar nominee Clarence Brown made a movie based on this same novel, and the cast included Mickey Rooney, Frank Morgan, Donna Reid and Van Johnson. In this new version, John Mellencamp provides the musical score, and Ms. Ryan has stated that the novel helped her work through a difficult time in her personal life. She’s likely to get more opportunities to direct; her first outing is easy enough to watch, but just as easy to forget.

This entry was posted on Wednesday, September 21st, 2016 at 10:54 pm and is filed under Drama. You can follow any responses to this entry through the RSS 2.0 feed. You can leave a response, or trackback from your own site.