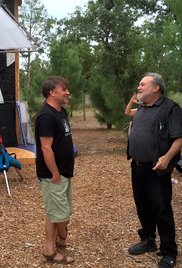 Greetings again from the darkness. He had the childhood dream of becoming a major league baseball player derailed due to a health issue. His dream of becoming a novelist fizzled because he preferred collaboration to solitude. So his dreams led to his destiny … that of being a ground-breaking filmmaker who “changed the landscape of independent filmmaking”. Director Richard Linklater is profiled by co-directors Louis Black (co-founder Austin Chronicle and SXSW) and Karen Bernstein (Emmy and Grammy award winner), two passionate and knowledgeable folks who are understandably fans of Linklater and the Austin film landscape.

The film kicks off with a scene from Slacker (1991) in which Linklater himself appeared as a taxi passenger rambling philosophically about the bus station. It then time warps to the red carpet event for the premiere of Linklater’s Boyhood (2014), setting the stage for filling the gap of more than two decades.

It might be best to think of this as a tribute to Linklater the filmmaker rather than an in-depth analysis of how he creates his art … though we do get to see him on set. Some of the time is spent watching Linklater and Black peruse old journals and early screenplays as the young director was honing his thoughts and talent. This type of nostalgia could be overdone, but instead it allows us to better understand the journey that has produced some outstanding work (along with a few forgettable projects).

Over the years, so much attention has been paid to the NYC vs LA preferences within the film industry; it’s a pleasure to acknowledge the “outsider world” of Austin, Texas … a film scene nurtured by Linklater and his cronies. There are plenty of family photos and home videos, along with the celebrity input of Jonathan Demme, John Pierson, Kevin Smith, Matthew McConaughey, Jack Black, Ethan Hawke, Patricia Arquette, and Ellar Coltrane (the kid from Boyhood). Each speaks admiringly in regards to Linklater’s spirit and passion for the work. It’s especially interesting to hear of his budget/fundraising struggles on Boyhood – an understandable challenge since the project took 12 years, and required he return for funding each and every year!

This entry was posted on Thursday, August 4th, 2016 at 10:37 pm and is filed under Documentary. You can follow any responses to this entry through the RSS 2.0 feed. You can leave a response, or trackback from your own site.