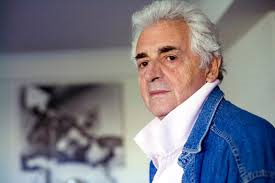 Greetings again from the darkness. There are many talented photographers, but not many that are well known. Quite a few photographers have shot famous folks, but few are famous themselves. These days we tend to think of photography as the barrage of celebrity privacy invasion shots courtesy of the paparazzi cameras. Co-writers/co-directors Justin Bare and Matthew Miele remind us … with this sturdy portrait of Harry Benson … that true photography is an admirable and respected art form.

Mr. Benson is now 86 years old and retains his heavy Scottish accent and ambitious work ethic. An illustrious career was kick-started in 1964 when he was assigned to cover The Beatles’ inaugural trip to the United States. His behind-the-scenes work included the infamous shot of the four lads blowing off a bit of stress with a hotel pillow fight in their hotel.

The film acts as a retrospective of Mr. Benson’s work, and it’s wonderful to hear him tell his own stories. Not many can claim to have been right in the middle of five decades of history, entertainment, politics and cultural events. This is a man whose work had him standing next to Bobby Kennedy in 1968 on the night he was assassinated. Elizabeth Taylor so trusted him, that she allowed him to photograph her just after her brain surgery.  World class recluse and chess champion Bobby Fischer posed for Benson, as did Muhammad Ali, Winston Churchill, Martin Luther King, Jr and Michael Jackson … to name just a few. It’s also fascinating to see his spontaneous shots of Greta Garbo swimming, and he literally went 50 plus years between photos of The Queen. His work on the front lines of Somalia is breath-taking … this from a man who has photographed the last eleven U.S. Presidents (every one since Eisenhauer).

In addition to Benson’s own recollections, the filmmakers also include observations and insight from such a diverse group as Dan Rather, Ralph Lauren, Bryant Gumbel, James L Brooks, Sharon Stone, Betty Buckley and Winston Churchill’s granddaughter. We get the impression that Mr. Benson fully comprehends his impact, but it’s his commitment to the job … to the shot … that has earned him the trust and reputation for integrity. Not everyone gets this shot …

This entry was posted on Sunday, May 8th, 2016 at 6:12 pm and is filed under Documentary. You can follow any responses to this entry through the RSS 2.0 feed. You can leave a response, or trackback from your own site.