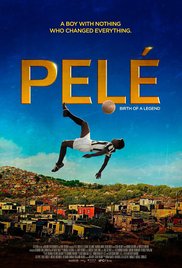 Greetings again from the darkness. From rags to riches … a common expression that often leads to a paint-by-numbers movie. Co-directors Jeff Zimbalist and Michael Zimbalist are fortunate in that their “coming of age” subject is the globally famous Pele’ – often considered the greatest soccer/futbol player of all-time.

Rather than revisit the career of the transcendent player who later dedicated his life to humanitarian causes, the film kicks off with a 17 year old Pele trotting out onto the pitch at the 1958 World Cup. It then flashes back 8 years to when 9 year old “Dico” was growing up in the slums of Sao Paulo. We get to see his relationship with his family … his dad taught him to play, and his friends were loyal to him and encouraged him to pursue his dream.

There are some similarities to The Sandlot as we watch the joy these boys have in playing the sport whenever and wherever they can … plus the origin of the somewhat derogatory and now immortal nickname. It seemed that Pele’ was able to carry this love of the game throughout his career. We see boys huddled around a radio listening to the 1950 World Cup as Brazil’s team was humiliated … an event that played a role in Pele’ returning pride to a bruised country.

Kevin de Paula plays Pele’ as he works his way up through the age groups and national teams. Often the youngest and shortest player, the film depicts him as a shy kid often out of his element … the polar opposite to the beaming superstar we so often saw later in his career. There is an explanation of the roots of the “Ginga” style and its ties to the Brazilian culture and martial arts.

For some reason, Vincent D’Onofrio is cast as Brazil’s Coach Feola and we are forced to endure a tortuous accent that is basically inexcusable these days. There are also some exaggerations in the crowd scenes and shots of the press, though young de Paula underplays the lead. Colm Meaney plays George Raynor, the coach of Sweden in that infamous 1958 World Cup, and we do get a cute little cameo from Pele’ himself.

The film does a nice job with the young man’s childhood and progression towards superstar (the IOC named him the athlete of the century). He is presented as close to his family, and inherently quiet and calm. The match clips of Pele’ that play over the closing credits are proof that a movie just can’t capture the transcendence of his talent.  Pele’ is truly the reason it’s “the beautiful game”.

This entry was posted on Saturday, May 7th, 2016 at 7:20 pm and is filed under Drama. You can follow any responses to this entry through the RSS 2.0 feed. You can leave a response, or trackback from your own site.