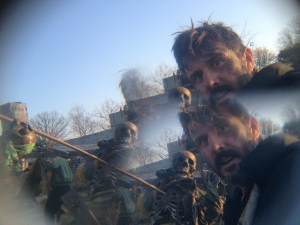 Greetings again from the darkness. One of the things that watching so many movies has taught me is to respect the filmmaker’s vision. Because of this philosophy, I can usually find some connection … the story, a character, the setting, or the camera work. It’s rare when no part of a movie works for me, and it’s even rarer to stumble on a real clunker at the Dallas International Film Festival. Writer/director Asiel Norton’s latest drove more than a few festival goers to head for the exits within a short period of run time.

Post-apocalyptic films by nature are bleak affairs, as they attempt to show us what will happen if we human beings continue on our current path. This one takes place about 100 years after humanity is mostly wiped out. We follow The Hunter (David Arquette) as he scavenges for food in a world known as The Rust. He also deals with voices telling him that he is the chosen one … the savior of humanity … Orion.

As with so many saviors, The Hunter gets distracted from his destiny. His challenge is to rescue The Virgin (Lily Cole) from being held prisoner by Magos (Goran Kostic), a magician/mystic/shape-shifter who follows the rituals laid out in detail within an elaborately published document to which he subscribes. The only other real characters are The Fool (Maren Lord) and a newborn infant baby who is the victim of one of Magos’ cruelest acts.

All of these elements could be the foundation for an interesting project, but some serious script work was necessary before this one went to production. It seems Mr. Norton was mostly concerned with pounding viewers with his style rather than providing any real story or character development. The shaky-cam is so excessive and filled with close-up that some will undoubtedly approach nausea. The narration and religious overtones are borderline irritating, but at least there is some humor in the use of Tarot cards as chapter headers (as if there were a story) … and of course filming in Detroit and calling it The Rust.

Maybe this is what films will look like after the end of civilization. I should have waited until then to watch this one.

(I didn’t bother searching for the trailer.)

This entry was posted on Saturday, May 7th, 2016 at 7:05 pm and is filed under Drama, Fantasy. You can follow any responses to this entry through the RSS 2.0 feed. You can leave a response, or trackback from your own site.