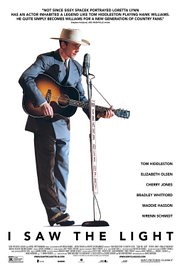 Greetings again from the darkness. Most Hollywood musical biopics follow a similar and predictable structure, which is why Walk Hard: The Dewey Cox Story was so easily able to parody the genre. Of course, the legendary singer/songwriter Hank Williams deserves more than predictable storytelling … but unfortunately, that’s exactly what he gets here.

Tom Hiddleston delivers a spot on physical impersonation of Hank – right down to the slightly hunched over (due to Spina Bifida Occulta) posture and bouncy onstage waggle. Yes, the very British Tom Hiddleston, who plays Loki in The Avengers and Thor movies, has managed to capture the presence of one of the all-time great Country and Western icons. Mr. Hiddleston worked on the beloved songs with Rodney Crowell and delivers some very nice singing – so nice in fact that the singing is distracting and misleading. Hank Williams sang his songs in angst … a tortured soul seemingly without choice in his need to share his art. No one could be expected to perform with that emotion, and the void is obvious.

As source material, director Marc Abraham (Flash of Genius, 2008) utilizes “Hank Williams: The Biography” co-written by George Merritt, Colin Escott, and William MacEwen. It may be the least creative title possible for a biography, and the movie correlates perfectly. We track Hank’s early days as a struggling singer whose dream is to someday perform on the hallowed stage of The Grand Ole Opry, to his gas station marriage to Audrey May (Elizabeth Olsen), through his alcoholism, drug use, womanizing, superstardom, fall from grace, and ultimately tragic death at the age of 29.

Despite the nature of Williams’ short life, the film only skims the surface and rarely digs too deeply. The steady stream of women/wives is difficult to track … perhaps that’s the point. Audrey is the only one who gets much screen time and Ms. Olsen plays her as an ambitious shrew who comes across as impossible to like and as unwilling to work at the relationship. A staggering number of Hank Williams songs are embedded as merely interludes separating scenes of misery for all involved … especially Hank, who seems to find little joy in life.

We’ve all seen the destruction that fame often leads to, and when combined with Hank’s painful back disorder and relentless alcoholism, it’s little wonder his body simply surrendered at such an early age. The movie just seems a bit too high-gloss for such a tortured soul, and despite the best efforts of Tom Hiddleston, the film is not worthy of someone who left the musical legacy of Hank Williams.

This entry was posted on Thursday, March 31st, 2016 at 9:44 pm and is filed under Drama. You can follow any responses to this entry through the RSS 2.0 feed. You can leave a response, or trackback from your own site.