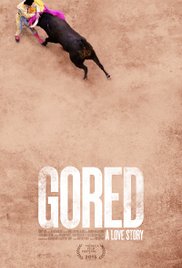 Greetings again from the darkness. Opinions of bullfighting seem to fall into three categories: those who admire the courage and athleticism of the matadors, those who respect the history and tradition so vital to the culture of some, and those who are outraged and disgusted by the cruelty bestowed upon the bulls. Director Ido Mizrahy and his co-writer Geoffrey Gray seemingly take no stance, and make no effort in manipulating anyone’s feelings toward bullfighting. Instead, their focus is on one man. A man with an inner-drive that even he can’t explain.

Antonio Barrera is billed as the most-gored matador in history. His official 23 times is remarkable when you consider that even once can kill a man … or at least destroy the bravura required to enter the ring. But this is not a story of numbers. It’s about Barrera’s relentless drive and passion for bullfighting, and his inexplicable (and sometimes medically impossible) ability to recover from injury and finish his duty. Once he was intubated due to lack of breathing, and as soon as he regained consciousness, he ripped out the tubes and returned to the ring … directly from the table.

Mizrahy “treats” us to more than enough clips of Barrera being gored and carried from the ring, but the most intimate and revealing moments come courtesy of interviews with Barrera’s wife, sister and father. It’s during these segments that we begin to understand that no logic can explain the matador’s need to enter the ring … or return to the ring. His wife explains how she lives in fear while understanding she is not his first love; his sister discusses his youth and early training, while his father’s inability to fulfill his own dreams probably etched in stone the destiny of the son.

The film opens and closes with Barrera’s final performance in December 2012, and it’s a breath-taking sequence featuring his crowd-pleasing Puerto Gayola – he kneels in the ring in front of the charging bull. Barrera muses on the acceptance that one must be ready to die while in search of the perfect performance, and how thoughts of dominating death seem like crazy thoughts to the rest of us.

It’s unfortunate that the film only offers a quick glimpse into Barrera’s post-matador life. It’s a brief mention of feeling “lost” after walking away from his dream, and wondering (like the rest of us mortals), what is his dream now? It’s clear managing the career of another matador does not fill the void, but we are left empty-handed and wanting to know more about Antonio Barrera … the former matador known not for his grace and elegance, but for his passion and courage.

This entry was posted on Monday, February 29th, 2016 at 9:11 pm and is filed under Documentary. You can follow any responses to this entry through the RSS 2.0 feed. You can leave a response, or trackback from your own site.