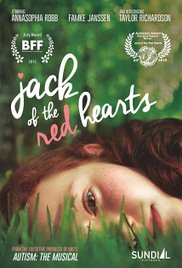 Greetings again from the darkness. Being the parent of an autistic child carries challenges that require incredible patience and love and extraordinary effort. Writer Jennifer Deaton and Director Janet Grillo (Fly Away, 2011) deliver an insightful and interesting look at these challenges through the eyes of two parents, their autistic daughter, their teenage son, and the in-home caregiver they hire.

The film begins with a glimpse of what appears to be two different worlds: a street wise teenage girl helping her younger sister “escape” from a foster home, and two beaten down parents of a young autistic daughter. Soon enough, these two worlds collide and Jack/Jacqueline/Donna is hired by the parents to be a live-in companion for their daughter. The parents are so desperate for help that they fall for the savvy con being played by Donna.

None of what happens is surprising … Donna turns out to have a knack for helping autistic Glory, the parents begin to experience a bit more happiness, the teenage son develops a crush on Donna, and the cloud of truth is constantly hovering. Even though some of the scenes are bit corny, for the most part the story is told in a grounded manner that allows us to connect with all of the characters – conveying the pressures, stress and periodic moments of breakthrough.

The acting is strong throughout. Taylor Richardson (A Most Violent Year) is exceptional as the autistic Glory. She is believable and never goes beyond what fits for the character. Famke Janssen and Scott Cohen are solid as the parents, and Israel Broussard shows real promise as teenage Robert/Bobert. Donna/Jack’s younger sister has limited screen time, but Sophia Anne Caruso (Brigitta in TV’s live version of “The Sound of Music”) makes it work. Shouldering much of the film is Anna Sophia Robb (Bridge to Terabithia, The Way Way Back) as Jack/Donna. She does her best work in the second half of the film, as her initial tough-girl stint is a bit shaky. However her scenes with Glory are outstanding, and it’s a pleasure to watch her slowly turn over a new leaf.

As strong as the cast is, much of the credit goes to director Grillo (ex-wife of David O. Russell) who has a real understanding of the world of autism, and keeps us focused on importance of family, the need to be loved, and the rewards of finding one’s place in the world.

This entry was posted on Saturday, February 27th, 2016 at 5:52 pm and is filed under Drama. You can follow any responses to this entry through the RSS 2.0 feed. You can leave a response, or trackback from your own site.