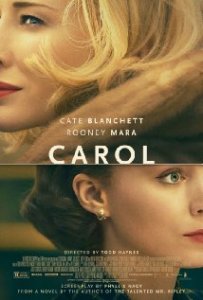 Greetings again from the darkness. When Patricia Highsmith first wrote her novel “The Price of Salt”, she had it published in 1952 under a pseudonym (Claire Morgan). This was a sign of the unforgiving social conventions of the era, which also play a key role in the story. At the time, no author would publically admit to writing a book about lesbian lovers, much less admit their participation in such an affair. Highsmith’s novel is the source material for director Todd Haynes’ bookend to his stellar 2002 film Far From Heaven. In that film, Dennis Quaid’s character struggles with his secret life as a gay man while married to Julianne Moore. In this new movie, Cate Blanchett is a married upper class socialite trying to deal with her true feelings for the opposite sex, while fighting to not lose custody of her young daughter.

Haynes has a real feel for attraction … what causes two people to be attracted to each other, and how do they handle it? He re-teams with cinematographer Ed Lachman to create yet another beautiful film with camera work, sets, costumes and a score (Carter Burwell) that complement the romance depicted by the two outstanding lead actresses: Cate Blanchett (Carol) and Rooney Mara (Therese). Ms. Blanchett is a 2-time Oscar winner (5 time nominee), and has become one of the few actors who make each of their films a must-see. She is a true force here as she sweeps into the captivating first sequence (a wonderful long take) and has her first interaction with wide-eyed shopgirl Therese as the two dance together through words and innuendo. It may be the best scene of the movie … at least up to the stunning final shot.

At its core, this is a pretty simple romance of two opposite worlds colliding at a time when their attraction was just not tolerated. 1950’s social conventions, being what they were, meant Carol’s husband (Kyle Chandler) could use her sexual preferences as evidence of immorality in his fight to gain sole custody of their daughter. Cinematically, it’s much more about style. Carol is a beautiful mink-wearing work of art, while Therese is seeking her place in the world, while trying to make sense of her feelings. Every scene drips with style … the cars, the clothes, the restaurants; even cigarettes become a fashion accessory between the fingers of Carol.

Carol and Therese take a road trip, and it’s not until Iowa that the relationship is consummated – a scene that finds neither actress shying away from the moment. Fittingly, this occurs in a motel located in Waterloo … leaving little doubt the turn this story will take.

Supporting work is provided by Sarah Paulson (“American Horror Story”) as Carol’s friend and ex-lover, Jake Lacey (“The Office”) as Therese’s would-be suitor, John Magaro (The Big Short) as her friend and supporter, and Cory Michael Smith (“Gotham”) as a double-life salesman. But this show belongs to Blanchett and Mara. They are terrific together – capturing the unspoken, subtle gestures required by the repressive era they find themselves.  Mara’s character is difficult to describe, but most intriguing to watch and absolutely vital to the message.

Phyllis Nagy adapted Ms. Highsmith’s novel (which was re-published in 1990 under her own name), and her care for the material is clear. Todd Haynes then worked his magic with the look of the film, and the two lead actresses deliver a clinic in nuance and dealing with oppression. As it plays, the strength of the film is with the internal struggles faced by the two lead characters. It leaves us to wonder if the film might have been more powerful had it delved a bit deeper into what the characters would have faced from the outside world.

This entry was posted on Saturday, December 26th, 2015 at 9:38 pm and is filed under Drama. You can follow any responses to this entry through the RSS 2.0 feed. You can leave a response, or trackback from your own site.