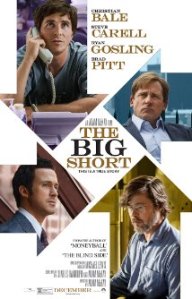 Greetings again from the darkness. Since there are so few subjects more hilarious than the 2008 financial crisis, let’s get the writer/director of Anchorman and Step Brothers to adapt the Michael Lewis best-selling book. OK, so it’s improbable that was the thought process, but kudos to whomever was responsible for bringing Adam McKay to the project. Before you go assuming it’s a poor fit, it should be noted that McKay is also one of the creative minds behind “Funny or Die”, a site filled with political and social satire. It’s that satirical approach that makes this explanation of what went wrong so accessible to the masses. Make no mistake … this is entertaining and educational and thought-provoking and nauseating and infuriating and funny and disheartening.

If the film were described as a tutorial on MBS (Mortgage-backed Securities), CDO (Collateralized Debt Obligations), Credit Default Swaps, Tranches, Bond Ratings, and Sub-Prime ARMs, most people’s eyes would glaze over and they would keep skimming for showtimes of other new movie releases. In truth, it is those things – and so much more. This is the story of how the housing market collapsed leading the government to the massive bailout that saved some of our largest financial institutions … and how a small group of people recognized what was happening and literally bet against the U.S. economy. It follows the bread crumbs to re-assemble the slow process of spotting the fault in the analysis that lead to massive corruption that finally crossed over into systematic fraud … and does so by using creative presentation approaches like a Bond Rating game of Jenga, and celebrity snippets for definitions and examples.

Ryan Gosling stars as Jared Vennett (based on Greg Lippmann), a slick Deutsche Bank trader who acts as our guide through the muck of shorting securitized mortgages, while simultaneously working the system for his personal benefit. He works with Mark Baum (a character based on Steve Eisman, played by Steve Carell) who manages FrontPoint Partners, and Baum’s team played by Rafe Spall, Hamish Linklater and Jeremy Strong (whom you might remember as Lee Harvey Oswald in Parkland). While this is going on, there are two other similar story lines we are following. The first is Christian Bale playing hedge fund manager and savant analyst Dr. Michael Burry at Scion Hedge Fund. Burry is often cited as the first to recognize the impending collapse and invest against the market. Finally, we have the “garage band” investment company based on Cornwall Capital run by (names changed) Jamie Shipley (Finn Wittrock) and Charlie Gellar (John Magaro) with a big boost from former trader Ben Rickert (played by Brad Pitt in a role based on Ben Hockett). The stellar cast is rounded out by Marisa Tomei as Baum’s concerned wife, Tracy Letts as the head of Scion, Max Greenfield and Billy Magnussen who play cocky and clueless subprime mortgage brokers, and Melissa Leo who plays a Standard & Poor’s employee.

It’s difficult to tell this story without casting blame, and few escape the wrath of Lewis, McKay and co-writer Charles Randolph. Those absorbing shots to the bow include: the Federal Reserve, the SEC, Rating Agencies, big Banks and Investment firms, Fund Managers, Traders, Realtors, and Mortgage Brokers. Companies specifically named include JP Morgan Chase, Bank of America, Deutsche Bank, Barclays, Merrill Lynch, Goldman Sachs, WAMU, Option One, Lehman Brothers, Bear Stearns, and The Wall Street Journal. The point made is that the problem goes/went beyond greed, and is/was truly system-wide, with each segment protecting themselves and their turf. Somehow the name Barney Frank is not mentioned, and FNMA and FHLMC escape mostly unscathed, while CRA lending requirements are not discussed.  It’s not politically correct (and not mentioned here) to question why so many borrowers who couldn’t pay their rent regularly accepted loans that they knowingly couldn’t afford to repay. But that’s a topic for another time.

With full disclosure, I will admit to having been in the mortgage business for 18 years. Though I was never involved with subprime loans, I will always disagree with the stance that the industry and institutions were not aware of the risk and impending collapse. It was common knowledge that “no doc” loans were absurd, and the adjustable rate schedules and prepayment penalties for subprime (and some conventional) loans were beyond impractical and more like homicidal (from a lending perspective). In the film, Baum interviews an exotic dancer who owns multiple homes … all loans made with minimal documentation due to the cash basis of her business. The terms of the loans set her, and other similar borrowers, up for financial ruin … right along with the housing sector and economy. The subprime mortgage brokers portrayed by Max Greenfield and Billy Magnussen may seem cartoonish, but Baum’s confusion with their “confession” versus “bragging” is spot on. There were many just like these two clowns who considered themselves “rock stars”, when in fact, there were really “bartenders who now own a boat”.  These weren’t the type to question whether the loans made sense … only how many could they close to pad their 5 and 6 figure per month income levels.  Of course, in defense of these morons, it was the banks and lenders who designed the loan programs to “feed the machine” with more and by necessity, higher risk loans … to the point where it was no longer possible to spread the risk wide enough for protection. Hence, the collapse.

By the end of the movie, you should expect to have a headache and feel quite cynical towards the system. Despite the humor interjected by quick-hit segments from Margot Robbie, Selena Gomez and Anthony Bourdoin, the seriousness of the topics is more than bubble baths, blackjack and fish stew. The film leaves us angry and nauseous from what happened in 2008, but more importantly questioning … Has anything changed? Have we learned anything? These answers are likely to cause a more sickening reaction than looking back seven years.

This entry was posted on Thursday, December 24th, 2015 at 5:27 pm and is filed under Comedy, Drama. You can follow any responses to this entry through the RSS 2.0 feed. You can leave a response, or trackback from your own site.