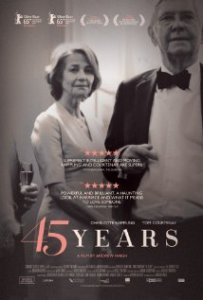 Greetings again from the darkness. Relationships are messy and complicated. Even the best ones. Even those that last 45 years. Writer/director Andrew Haigh (Weekend, 2011) understands this and delivers a film not about older people, but instead about the secrets, the doubts and the regrets experienced by anyone and everyone who is part of a committed relationship. His message is delivered through the extraordinary performances of Tom Courteney and especially Charlotte Rampling.

Just four days prior to a planned party to celebrate their 45th wedding anniversary, the stillness and quiet of Geoff’s and Kate’s long-established familiarity is disrupted by the startling news that his girlfriend of 50 years ago has been discovered preserved in a Swiss glacier.  What could have been a simple blip on the radar turns out to be a slow revelation of true emotions that have clouded this marriage. Kate’s realization that her seemingly fine life is now undeniably tainted is gut-wrenching to behold.

Ms. Rampling’s performance is subtle and brilliant. The camera captures the whirlwind of emotions through her facial expressions and telling body language. She carries herself with grace and dignity, even as she emotes devastation. A scruffy Mr. Courteney seems oblivious to how deeply his reaction has wounded his wife, even as he dives more and more into the past … a journal, a slideshow, smoking cigarettes, a trip to the travel agency.

Haigh’s script and direction are such that the intimacy and personal pain is evident even in scenes that feature only one of the two leads. The lack of raised voices or outbursts belies the pain felt by both Geoff and Kate, and the pain is never more evident than when we finally reach the anniversary party. As Geoff delivers a rambling speech about the ups and downs of marriage, the camera equally captures the face of Kate as she expertly dons the façade required in public for those who are lost emotionally. The couple then dances to The Platters’ “Smoke Gets in Your Eyes” and Kate’s faces hides little of her internal turmoil. Haigh ends with one of the most soul-crushing final shots one could ever expect to see. It’s the perfect ending to a dose of reality most of us hope to never experience.

This entry was posted on Tuesday, December 22nd, 2015 at 9:59 pm and is filed under Drama. You can follow any responses to this entry through the RSS 2.0 feed. You can leave a response, or trackback from your own site.