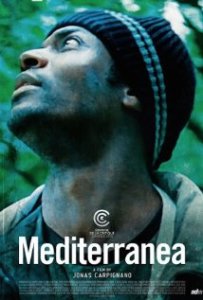 Greetings again from the darkness. Success on the film festival circuit is much deserved for this first feature film from writer/director Jonas Carpignano, as he expands his short film A Chijana (2012). It’s based on the true story of a young man who migrated from Burkin Faso to the southern Italy town of Rosarno. What makes this special is that the real immigrant, Koudous Seihon, stars in the film and recreates much of what he went through.

We witness the obstacles facing those trying to leave Africa … they need money and assistance and a whole lot of luck. Mr. Seihon plays Ayiva, and he is traveling with his brother Abas (Alassane Sy). The rickety boat they pile into is one most of us wouldn’t consider sea-worthy enough to cross the Mediterranean Sea (especially through a storm), but it’s their only option.

They are certainly disappointed in the shanty town that becomes their new home. However, soon enough they realize sleeping on the ground in cold weather with but a thin quilt is no hardship compared to the everyday risk of violence and racism. Most of the locals are not welcoming in the least, and the hatred often escalates. It’s what led to the riots of 2010, which director Carpignano touches on here.

The film has a no-frills docu-drama feel to it, and Seihon has a real screen presence. Ayiva’s survival skills are enhanced by his ability to blend into his environment – he becomes what he needs to be to persevere. Unfortunately his brother rebels and lets his anger affect his actions. The real world struggles of migrants and refugees are a global issue these days, and the film brings into focus some of the struggles faced by those who see no other option.

This entry was posted on Thursday, November 19th, 2015 at 9:32 pm and is filed under Drama, World Cinema/Foreign. You can follow any responses to this entry through the RSS 2.0 feed. You can leave a response, or trackback from your own site.