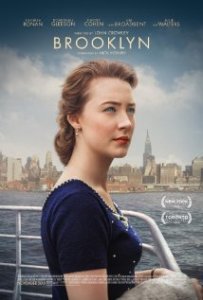 Greetings again from the darkness. A popular proverb “Home is where the heart is” is filled with truth … unless the heart belongs in two places. Such is the case with Ellis, an Irish girl who leaves behind her family and homeland to discover the new world opportunities afforded by 1950’s America. The film is based on the popular and critically-acclaimed novel from Colm Toibin, and is directed by John Crowley (Is Anybody There? 2008) with a screenplay from Nick Hornby (About a Boy, An Education). It’s a blend of romance, drama, and self-discovery, while also examining a couple of diverse cultures from lands separated by more than 3000 miles (and a big ocean).

Saoirse Ronan plays Ellis in a performance that is sure to garner much Oscar talk. It’s only been 8 years since Ms. Ronan exploded onto the screen as 13 year old Briony in Atonement. In this current role we watch her blossom like a flower as she grows from a timid and reserved shop girl with a bleak future in Ireland, to a fully-realized woman with much spirit and hope. On that journey, she experiences many life obstacles including seasickness, homesickness, catty and envious housemates, heartbreak and romantic awkwardness … all while dealing with the overwhelming nature of her new world.

Director Cowley makes some interesting visual choices. We begin with a muted color palette and mostly close camera shots of Ellis’ life in Ireland. This “closed in” feeling continues through her crossing of the Atlantic. However, once she steps through the blue doors of Ellis Island, the world opens up with wide shots and shocks of bright colors. These contrasts blend together in the third segment where Ellis returns to Ireland after a family tragedy. The look of the film at any given time mirrors the mood and circumstance of our lead character.

Ellis struggles to adjust to the United States, both in the bordering house run by the colorful Ms. Kehoe (a terrific Julie Walters), and in the ritzy Bartocci store where she clerks for a demanding supervisor (Jessica Pare’, “Mad Men”). Ms. Kehoe provides her girls with such life guidance as “Giddiness is the 8th Deadly Sin”. It doesn’t take long for Ellis to meet Tony (a breakout performance by Emory Cohen, The Place Beyond the Pines), a pleasant and polite local Italian plumber who is enchanted by her. Their time together provides a wonderful comparison piece for today’s courtship vs. that of the 1950’s.

The movie is beautifully paced, filmed and acted; however, there are some issues to fight through with the story and details of the main character. Her return to Ireland introduces Jim Ferrell (solid work from the ever-evolving Domhnall Gleeson), and just like that, Ellis is confused about Tony’s line: “This is where your life is”. This time of confusion for her, creates similar type confusion for viewers as we either understand her uncertainty, or question it. This distracts a bit from some of the impactful elements like her transition from clueless fish-out-of-water on her first cruise, to strong mentor for an Irish girl much like her younger self on a later trip. The script has more than a few of these moments of gold, and Saoirse brilliantly nails each.

This entry was posted on Thursday, November 19th, 2015 at 10:23 pm and is filed under Drama. You can follow any responses to this entry through the RSS 2.0 feed. You can leave a response, or trackback from your own site.