Greetings again from the darkness. I’m a University of Texas alumnus and have vivid childhood memories of Freddie Steinmark the player, followed by Freddie Steinmark the tragedy, and finally Freddie Steinmark the inspiration. His legacy remains an active part of the Longhorns football program today via the stadium scoreboard dedication and the locker room tribute that is part of every game day in Austin. This is the directorial debut of Angelo Pizzo, who is known for writing two other inspirational sports movies: Hoosiers and Rudy.

It’s difficult not to cringe when the film opens in 2010 with a reporter interviewing legendary and elderly former coach Darrell Royal, who is dementia-stricken and forgetful … until he starts speaking of Freddie. The cringe-inducing part isn’t Coach Royal’s dementia (of which we fans were all aware), but rather the amateurish make-up applied to Aaron Eckhart in an attempt to age him into the 85 year old icon. Fortunately this segment is brief, and we are soon enough picking up a high school aged Freddie as he practices and works out ferociously with his dad in hopes of fulfilling his dream of playing football at Notre Dame.

Finn Wittrock (“American Horror Story”) plays Freddie, and captures the intensity, ambition and goodness of the young man who would galvanize the Longhorns program and end up making quite an impression on those Notre Dame coaches, but for much more than his play on the field. Burned into my memory (and that of anyone who witnessed it) is the shot of Freddie on crutches at the 1970 Cotton Bowl.

“The Game of the Century” is the centerpiece game of the movie, and we actually get a clip of President Richard Nixon arriving to the Texas-Arkansas game of 1969. It turned out to be Freddie’s final football game, but more aptly, a continuation of his influence. However, this is just as much the story of Freddie the individual as it is Freddie the football player. His determination, zest for life and incredible courage are the message here … not tackles and interceptions. Even his relationship with his high school and college sweetheart Linda (Sarah Bolger) seems the stuff of which dreams are made.

In addition to this film, there have been three books written about Steinmark: in 1971 Freddie worked with Blackie Sherrod on an autobiography called “I Play to Win”; in 2011, Jim Dent wrote “Courage Beyond the Game”; and just this year, the University of Texas published a new biography entitled “Freddie Steinmark: Faith, Family, Football” by Bower Yousse (a former friend and teammate). It should also be noted that Steinmark’s battle against cancer inspired Congress to pass the National Cancer Act of 1971, beginning the war on cancer and spurring a jump in cancer research that continues to this day.

It’s a football movie, but also a tearjerker. It’s a profile of an over-achiever, but also the story of a young man who inspired a team, a university and a nation. Every time you think the story is a bit corny, or that Freddie is too good to be true, just remind yourself that despite the cynicism permeating society today, Freddie Steinmark was flesh and blood, with a heart and soul and mentality that refused to surrender.

a picture of Freddie Steinmark: 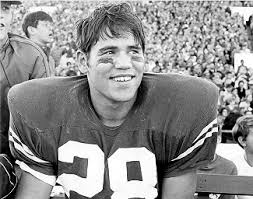 This entry was posted on Friday, November 13th, 2015 at 12:47 am and is filed under Drama. You can follow any responses to this entry through the RSS 2.0 feed. You can leave a response, or trackback from your own site.