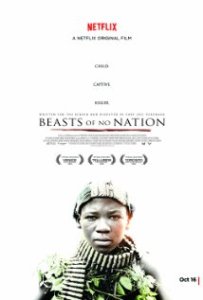 Greetings again from the darkness. Cary Joji Fukunaga has quickly established himself as an expert storyteller with his previous writing and directing of Sin Nombre (2009), Jane Eyre (2011) and the fascinating and conversation-sparking first season of “True Detective” (he did not direct the much-maligned Season Two).  He goes even deeper and darker this time by adapting Uzodinma Iweala’s novel about a child soldier.

When first we meet Agu, he is but an enterprising and fun-loving kid who thrives on mischief such as trying to sell “Imagination TV” – the empty shell of a console TV, complete with Agu and his buddies acting out scenes for those who peer through the picture tube opening. Agu describes himself as “a good boy from a good family”, and we believe him.

Somewhere in Africa is all we know about the location, and soon enough Agu’s village is under siege and he is separated from his mother, and forced to stay behind with the men – including his father and big brother. More terror forces Agu alone into the forest until he is brought into a mostly young group of rebel forces led by the Commandant (Idris Elba). It’s around this time that Agu begins “talking” to God through voice over narration that allows viewers to understand what’s going on inside Agu’s head – often quite contrary to what is happening on the outside as he transforms from mischievous kid to dead-eyed child soldier.  When Agu stops speaking to God, we understand that he believes he no longer deserves to be heard, but his words to the universe (directed to his mother) let us know, this boy has not yet lost his soul.

Though we never understand the war, or even who is fighting whom, this uncertainty is designed to help us better relate to Agu. He may be a tough-minded soldier, but we also never forget that he is mostly a little boy hoping to re-connect with his mother. Idris Elba plays the Commandant as part father-figure, part war lord, and part cult leader. He is a menacing presence one moment and a soothing voice of reason the next. When we (and Agu) learn the full story of his multiple sides, we are both sickened and disheartened. It’s the performances of both Elba and newcomer Abraham Attah (as Agu) that make this such a devastating and fascinating movie to watch, and it’s the filmmaking of Fukunaga that keeps our eyes glued to the screen when we would just as soon turn away.

This is a Netflix original film and they are experimenting with a simultaneous release in theatres and streaming. This approach has not previously been met with open arms by theatre chains when attempted by other distributors. It will be interesting to see if Netflix can make it work.

This entry was posted on Friday, October 16th, 2015 at 8:37 am and is filed under Drama, Thriller, War. You can follow any responses to this entry through the RSS 2.0 feed. You can leave a response, or trackback from your own site.