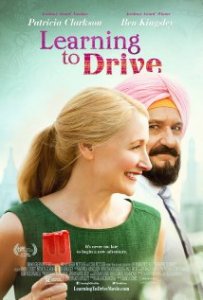 Greetings again from the darkness. Many movies have utilized the career-focused husband who is oblivious to how his inattentiveness leads to a crumbling marriage and estranged family. It’s much rarer to have a professionally successful woman at the core of a story where she is the neglectful one, and the dissolved marriage leaves her in emotional shambles.  The metaphor here is obvious yet effective, as the woman tries to put her life back together and discover herself in the process … by “learning to drive”.

Patricia Clarkson stars as Wendy, a very successful New York book critic, who is blindsided when her husband (Jake Weber, “Medium”) dumps her for another woman. It turns out Wendy is infinitely more attentive to her computer screen than to her husband and daughter (Grace Gummer). In a fortuitous turn, the cab driver during the marital break-up is a Sikh Indian-American named Darwan, played by Sir Ben Kingsley.

Darwan’s second job just happens to be driving instructor, which means he can provide life lessons and philosophy to Wendy while simultaneously reminding her to fasten her seatbelt and check the mirrors. During this time, Darwan is also taking on a wife via arranged marriage to Jasleen (Sarita Choudhury, “Homeland”). His patience and way of life is challenged by both women, so the teacher also becomes a student.

The scenes featuring Clarkson and Kingsley are the film’s best, and inject some moments of humor to go along with the force-fed melodrama. Ms. Clarkson is at her best here flashing anger, vulnerability and a realization that life opens up for those who open up themselves, but she can’t overcome what amounts to a film that should air on Oprah’s network.

Director Isabel Coixet also worked with Clarkson and Kingsley in her 2008 film Elegy. Though it teases some interesting topics, this story sticks mostly to the surface, never digging too deeply. Because of this, it’s a pleasant film that will easily entertain adult audiences who prefer their movies with no real surprises or suspense.

This entry was posted on Thursday, September 10th, 2015 at 2:56 pm and is filed under Drama. You can follow any responses to this entry through the RSS 2.0 feed. You can leave a response, or trackback from your own site.