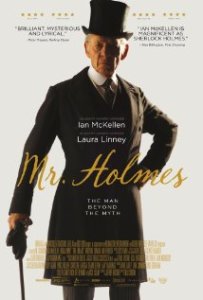 Greetings again from the darkness. Be honest … would you be excited to see a film if it were described as follows: “A grumpy 93 year old man struggles with his failing mind and deteriorating body as he tends to his beehives during retirement in a small coastal town”. Chances are that synopsis would cause you to skip on to whatever else is showing at the theatre. However, a single revelation would likely change your mind … the elderly man is actually legendary detective Sherlock Holmes.

Ian McKellen stars and holds little back as he portrays the elderly Holmes trying to reconcile the past, the present and his failing health. And yes, there is one last case to solve … only it’s the last case he actually solved 35 years earlier. Sadly, Holmes can’t recall how that case ended, and the fictionalized version written by his friend John Watson offers no resolution.

We first see Holmes as he returns from an international trip – a trip that seems a bit out of place with the rest of the movie; at least until it circles back near the end of the film. In fact, we get quite a bit of back and forth between the present and past, and McKellen pulls off both the elder and much younger Holmes … though his performance as the faltering, frail one-time genius is Oscar caliber.

Laura Linney plays his housekeeper, but it’s her son Roger (Milo Parker) who jells with Holmes and re-kindles that twinkle in the eye. The scenes with Roger and Holmes provide poignancy and humor, and also the dose of reality so necessary to a film focusing on a living legend.

Bill Condon (Dreamgirls, Gods and Monsters) directs the film, which is based on the novel “A Slight Trick of the Mind” by Mitch Cullin, and pretty quickly pulls the rug out from under us on the iconic deerstalker cap and the ever-present pipe. Still, only the staunchest, least-flexible fans of Sir Arthur Conan Doyle’s character will be turned off by this mostly gentle and insightful look at aging – and a reminder that even fictional geniuses grow old.

Baker Street makes an appearance, as does the charred and blackened Hiroshima site, and a blurry Dr. Watson. Don’t expect the frantic pace of Robert Downey, Jr or the elegant precision of Basil Rathbone and Benedict Cumberbatch. Instead, enjoy the subtle moments, the wry smiles and the valiant attempt to bring a mortal end to the seemingly immortal Great Detective … with a few clues tossed in for good fun.

This entry was posted on Thursday, July 16th, 2015 at 9:20 pm and is filed under Drama, World Cinema/Foreign. You can follow any responses to this entry through the RSS 2.0 feed. You can leave a response, or trackback from your own site.