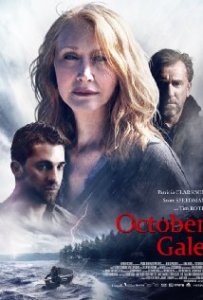 Greetings again from the darkness. Writer/Director Ruba Nadda likes to explore human nature and unexpected romantic attraction. She did this in Cairo Time (2009) and does so again here in this excruciatingly slow-moving “thriller” with an interesting beginning, muddled middle, and a final act that reminds of wet fireworks … a dud. On the bright side, actress-extraordinaire Patricia Clarkson never allows us to lose interest.

I’ve often written of my enjoyment of slow-burns and slow-builds for thrillers, and the best manage to generate a sense of caring from the viewers as they move towards the climax. Unfortunately, this one offers little more than an intriguing premise that places one ridiculous development on top of the next.

Patricia Clarkson plays a doctor whose beloved husband has recently passed away and she heads to their lake cottage for some peace and quiet. Not long after, an injured Scott Speedman shows up in her living room. Being a doctor, she performs bullet-removal surgery with needle-nosed pliers, and then of course, finds herself attracted to the young gunshot victim who is being hunted by the father of a guy Speedman killed.

We know the showdown is coming, but it seems to take forever to arrive, and then is pretty anti-climactic despite the presence of Tim Roth as the revenge-seeking father. The romantic attraction is pretty far-fetched and plays like a Nicolas Sparks story, or even a 1990’s Tom Berenger or Ashley Judd thriller.

The focus on death could have gone much deeper, psychologically speaking, and there is a brief scene where Roth tells Speedman “You always think there’s going to be more time” that leads us to believe things are going to get really interesting. Instead more attention is given to the unlikely romance and the kinda hokey manhunt. Fortunately, the cinematography around beautiful Georgian Bay helps offset the story and the manipulative score, and of course watching Patricia Clarkson and Tim Roth work is always somewhat satisfying.

This entry was posted on Monday, March 2nd, 2015 at 6:38 pm and is filed under Drama, Thriller. You can follow any responses to this entry through the RSS 2.0 feed. You can leave a response, or trackback from your own site.