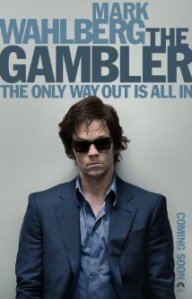 Greetings again from the darkness. “I’m all in!” That’s a gambling phrase of which even the most risk-averse amongst us recognizes. When Blackjack addict Jim Bennett (played by Mark Wahlberg) goes all in, which he does every time, it’s more proof that he is “the kind of guy that likes to lose” … a description offered by one of the mobsters and loan sharks who lend him money.

Director Rupert Wyatt (Rise of the Planet of the Apes, 2011) and screenwriter William Monahan (The Departed) deliver a remake of the very cool 1974 film of the same title starring James Caan and written by James Toback. Wahlberg is spot on as the self-destructive gambler who, rather than live for the thrill of winning, seems intent on pushing the envelope of misery and turmoil. His character manages to go seriously in debt to the Koreans who run the underground gambling establishments, as well as ruthless gangster Michael Kenneth Williams (“Boardwalk Empire”), and a philosophical mobster (a bald John Goodman) doing his best Jabba the Hut impersonation.  These are three guys most of us would avoid at all costs.

Unfortunately, it’s a bit more challenging to accept Wahlberg as the rebellious writing prodigy with a privileged background, who articulates in a motor-mouthed rapid-fire onslaught of derisive observations meant to prove how he so despises mediocrity. It’s obvious Wahlberg is “all in” for this role, but it’s difficult not to compare to the more nuanced performance of Caan forty years ago.

Brie Larson (so great in Short Term 12) plays the bright student in Wahlberg’s class, but her role is so limited we are left to only imagine the heights of her talent. Anthony Kelley plays Lamar, a college basketball player ripe for Wahlberg’s world, and Andre Braugher has a blink-and-you’ll-miss-it scene as the college dean. Richard Schiff offers up some comic relief as a pawn broker making Wahlberg’s misery just a tad worse. The great George Kennedy plays Wahlberg’s dying grandfather in the film’s opening scene, and he is the first to provide warning on the mess his grandson has created.

Jessica Lange does a wonderful job as Wahlberg’s estranged mother who is filled with both scorn and sadness at the state of her son, and offers up one last bag of cash in an attempt to allow him to begin anew. The support work is strong across the board, but it’s Goodman who stands out, both with dialogue and a physical presence that deserves some type of award for personal courage and lack of inhibition. His monologue on “F.U. money” is worth the price of admission, though you may request a refund after seeing him shirtless in the sauna.

There is a distinctive style to the film, though at times it comes across as a Scorcese wannabe. From a soundtrack perspective, the diversity of music ranges from classical to folk to big band, with some of the lyrics acting as commentary on the story. The film is pretty entertaining as you watch, but leaves an emptiness once it’s over. With so much that works, it’s a shame it all disappears so quickly … just like money on a Blackjack table.

SEE THIS MOVIE IF: you need a lesson on “F.U. Money” OR you need proof that a shirtless movie star is not always a pleasant thing

SKIP THIS MOVIE IF: you are seeking gambling tips OR your ears burn when exposed to profanity

This entry was posted on Thursday, December 18th, 2014 at 10:13 pm and is filed under Drama, Thriller. You can follow any responses to this entry through the RSS 2.0 feed. You can leave a response, or trackback from your own site.