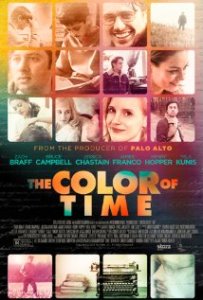 Greetings again from the darkness. It’s either a most unusual biopic on Pulitzer Prize winning poet CK Williams, an example of how director Terrence Malick has influenced the next wave of filmmakers, or a self-congratulatory exercise disguised as a class project. Regardless of your final take, most cinephiles will muster at least a modicum of interest in a film with 11 directors and 12 writers … each NYU film students during James Franco’s time on campus as an adjunct professor.

We see the life of CK Williams through the flashbacks and memories of James Franco (as an adult Williams prepping for a reading of “Tar”). Williams as a child, as an adolescent, and as a college student (played by Henry Hopper, son of Dennis) offer a glimpse into the girls and events that helped shape his poetry. The sequence of Williams as a child is so similar to Malick’s Tree of Life, that we viewers experience our own flashbacks … right down to Jessica Chastain recreating her scenes from that movie (this time as Williams’ mother).

Mila Kunis plays Catherine, Williams’ second and current wife, and it’s clear – in a modern expressionist kind of way – that they are very happy together. There are a couple of disjointed sequences that come across as created simply to provide an outlet for Zach Braff and Bruce Campbell. However, when dealing with poetry, rules don’t apply … at least that seems to be what this group of young filmmakers would have us believe. The washed out colors, fuzzy focus, shots of nature, and muted emotions dotted with monotone dialogue are all elements of artsy films. Whether these are the foundations of artsy films is a separate topic. Interspersed throughout are a couple of clips of CK Williams with his own readings.

Experimental filmmaking is always a risk and should not be discouraged. It’s given us every advance in the medium for a century. It is a bit worrisome, however, when experimental film appears so similar to the work of a current master. Let’s hope that’s just the first step in the process of developing filmmakers. This one also acts as a reminder that turning poetry into actual images often defeats the purpose of the written words.

This entry was posted on Thursday, December 11th, 2014 at 5:06 pm and is filed under Drama. You can follow any responses to this entry through the RSS 2.0 feed. You can leave a response, or trackback from your own site.