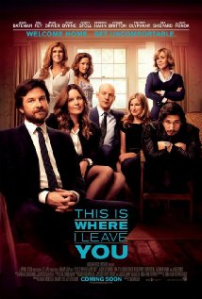 Greetings again from the darkness. After watching this movie, I thought about researching whether the boobs of a 76 year old actress had ever been as front and center as they are in this dramedy from director Shawn Levy – not counting Calendar Girls which was for a worthy cause. Luckily I came to my senses, and realized that’s not a topic anyone should google … except maybe a 76 year old man.

Jane Fonda is the actress whose enhanced assets are so prominently featured, and she plays the mother of four adult children brought together to mourn the death of the family patriarch. This is based on the novel by Jonathan Tropper and though it’s watchable enough, it could have benefited from a better script adaptation and a less mainstream comedy director. Mr. Levy provided the popular and entertaining A Night at the Museum, as well as a long list of simple minded movies that didn’t prepare him for the depth of Tropper’s story.

Obviously the issue with so many characters and talented actors is that screen time is limited. Somehow each of these have one key moment in the film, and that may be the biggest issue. Some of these we want to know more about (Olyphant, Byrne, Brittain), while others could have been written out of the script altogether (Lazar, Schwartz, Shepard) and the movie wouldn’t have suffered, and might have improved.

Most of the story revolves around Bateman and his situation – crumbled marriage, lost job, dead father, plus even more. Going through that and facing his sit-com worthy dysfunctional family provides an unending stream of none-too-subtle moments: a basement sleeper/sofa that won’t fold out, roof top talks with his bossypants sister, and even fisticuffs inside the family and out.

This is another in the Suburban-angst sub-genre, and the numerous contrived scenes and formulaic sequences are salvaged only by the talented casts ability to squeeze the moment from the next one-liner. There is so much rage and resentment in this family that we viewers are willing to find humor in the toddler toting his portable potty with him everywhere, or even Bateman taking the expected prat fall in an ice rink. There is little edge to this material, but it’s not difficult to glimpse how the right director could have approached the genius of The Royal Tenenbaums or the original Death at a Funeral, rather than a generic blend of Garden State and August:Osage County.

Britton, Byrne and Batemen all have their moments, and the movie is certainly watchable … though it could have been exceptional as either a straight out comedy or an indie-type drama. No need to email me if you come up with additional films featuring 76 year old boobs.

SEE THIS MOVIE IF: you are up for the challenge of keeping track of the seemingly endless number of characters who have “a moment” during this one

SKIP THIS MOVIE IF: you share the sentiment with me and Jason Bateman’s character that there is no need to focus on Jane Fonda’s “bionic breasts”

This entry was posted on Sunday, September 21st, 2014 at 3:44 pm and is filed under Comedy, Drama. You can follow any responses to this entry through the RSS 2.0 feed. You can leave a response, or trackback from your own site.