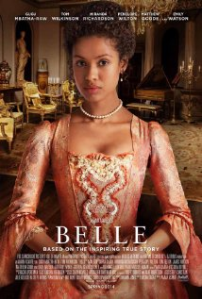 Greetings again from the darkness. Always a bit partial to films based on a true story, I would have to label this as a fictionalized historical period piece, and a step above most costume dramas (though the costumes here are quite stunning). While it’s a very attractive movie to look at, I was a bit frustrated at the multi-directional approach that just skimmed many topics.

The movie could have focused on the relationship between cousins Dido Elizabeth Belle (Gugu Mbatha-Raw) and Lady Elizabeth Murray (Sarah Gadon). Or it could have zeroed in on the unusual complexities raised by the illegitimate mixed race Belle being raised in British Aristocracy. Still another option would have been digging into the historical impact of Zong massacre and the subsequent arguments, court trials and appeals. Instead, we get a splash of each … which leaves the viewer wanting more detail on all three.

The cast is very strong and features Tom Wilkinson as Lord Mansfield, Lord Chief Justice of the King’s Court … he raises Belle at the request of his nephew (her father). Lord Mansfield’s wife is played well by the always excellent Emily Watson.  Also featured are Miranda Richardson, Matthew Goode, Penelope Wilton (always entertaining), James Norton, Sam Reid, and Tom Felton – who creates yet another despicable character to go with his Draco from the “Harry Potter” series.

Maybe the best term for this is historical melodrama, as the courtroom decision comes across as anti-climatic, with more third act attention paid to Belle’s love interest (Mr. Reid). Very little is known of the actual Dido Elizabeth Belle, but it seems clear that her role in the Zong trial was dramatically enhanced for the purposes of the film. In fact, more drama may have played out for the film’s writing credit between the director Amma Asante and the WGA. Though the director lost the writing credit, she can be proud enough of the final product.  The two cousins are featured in the famous 1779 painting (see below) that inspired the story. 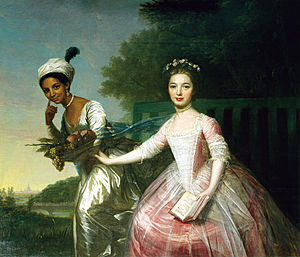 This entry was posted on Saturday, July 12th, 2014 at 8:00 pm and is filed under Drama, World Cinema/Foreign. You can follow any responses to this entry through the RSS 2.0 feed. You can leave a response, or trackback from your own site.